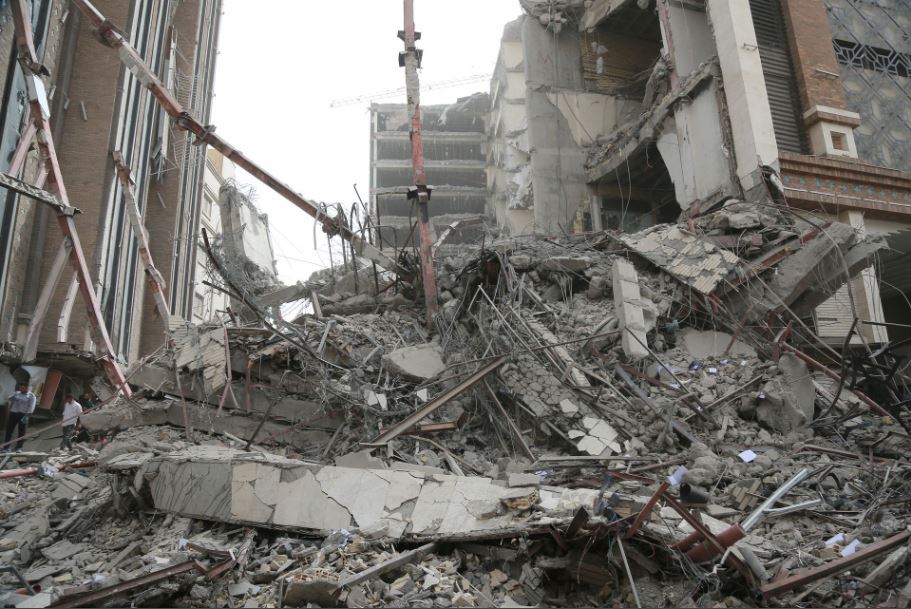 General view at the site of a ten-storey building collapse in Abadan, Iran May 23, 2022. WANA via Reuters

Protesters in several cities in Iran chanted anti-government slogans overnight, including "death to Khamenei", over a deadly building collapse in the southwest of the country, videos posted on social media showed.

Officials said the death toll had risen to 34 on Tuesday, with another 37 injured in the May 23 collapse of the 10-storey residential and commercial building in Abadan in the oil-producing region of Khuzestan.

Rescue workers continued to search for victims under the rubble, they said.

Authorities are blaming the collapse of the Metropol Building on individual corruption and lax safety and say 13 people have so far been arrested for construction violations.

Iranian protesters, however, blame it on government negligence and endemic corruption.

Shouts of "death to Khamenei", a reference to Supreme Leader Ali Khamenei, are heard on an unverified video shared on Twitter, which gives the location as the south Tehran district of Nazi-abad.

Another unverified video shows riot police roaming on motorcycles in the same area, apparently to disrupt or intimidate protesters.

In the southern port city of Bushehr, protesters are heard shouting "Death to the dictator", also a reference to Khamenei.

"They're lying that it's America; our enemy is right here," they shout.

Videos of protests in other Iranian cities are also posted on social media.

Iranian police have used tear gas and fired shots in the air to disperse crowds and have clashed with demonstrators during the week-long protests.

Iranians are already frustrated with high food prices and economic problems at a time when efforts have stalled to achieve a revival of a 2015 nuclear deal with world powers and, with it, relief from sanctions.