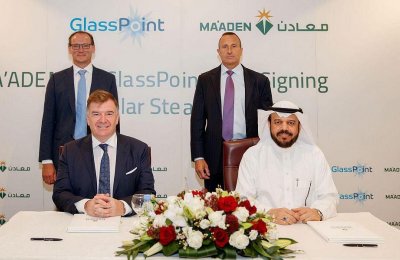 Saudi mining company Maaden has signed a deal with GlassPoint, a leader in industrial solar steam, to facilitate the study to develop the world's largest solar process heat plant at its alumina refinery in Ras Al Khair on the kingdom's east coast.
One of the fastest-growing mining companies in the world, Maaden operates the largest and most efficient vertically integrated aluminum complex in the world.
When complete, the 1,500 MW facility will help Maaden achieve sustainability goals by reducing carbon emissions by over 600,000 tonnes annually.
This represents more than 50% reduction of carbon footprint in Maaden's Alumina refinery and 4% of its overall carbon footprint, said the statement from the Saudi mining group.
Under this agreement, Maaden and GlassPoint will work together developing a more sustainable way to produce aluminum, which is a crucial metal for many global industries and the energy transition.
This MoU also represents GlassPoint's reemergence as a leader in solar process heat.
The deal was signed at Maaden HQ in Riyadh, Saudi Arabia by Riyadh Al Nassar, the Senior Vice President of Maaden's Aluminum Business and Rod MacGregor, CEO and Founder of GlassPoint in the presence of Maaden CEO Robert Wilt and GlassPoint CCO Jacob Drejer.
"As the third pillar of the Saudi economy, we aspire to be a role model in ESG in the kingdom," remarked Wilt.
"This significant development will dramatically reduce our carbon footprint and bring us closer to our mandate of carbon neutrality by 2050. As the world moves towards green aluminum, Maaden intends to help lead the way in this transition," he added.
On the new venture, Al Nassar said: "The proposed new facility, Maaden Solar 1, will be located within our alumina refinery in Ras Al Khair, and will harness the power of the sun to produce steam. This steam will inturn be used to refine bauxite ore into alumina."
"Alumina is a critical feedstock to Aluminum, which is one of the world's most crucial metals for many global industries going into a future that is focused on environment and sustainability," he explained.
"Maaden is leading the way to reduce industrial carbon emissions at scale by replacing fossil fuels with solar power to create heat. This facility when built will be the largest industrial solar steam plant in the world and the first deployed in both Saudi Arabia and in the aluminum supply chain," remarked MacGregor.
"With this MoU, GlassPoint is entering a new phase of growth to help decarbonize a range of industries seeking to lower their carbon footprint," he added.
A major player in the mining industry, Maaden said its mine-to-market aluminum business comprises the Al Ba'itha mine and fully integrated refinery, smelter, rolling and export facilities in Ras Al Khair.
It provides high-quality billets, ingots, slabs and flat-rolled aluminum products to customers across the globe, including multinational automakers and consumer brands.
As a global energy producer, Saudi Arabia is committed to advancing the fight against climate change. The Kingdom has unveiled the Saudi Green Initiative (SGI) to help the country become an international leader in sustainability.
Last year, the SGI unveiled a first wave of more than 60 initiatives, amounting to a SR700 billion ($186 billion) investment to accelerate the green economy across Saudi Arabia and beyond.-TradeArabia News Service