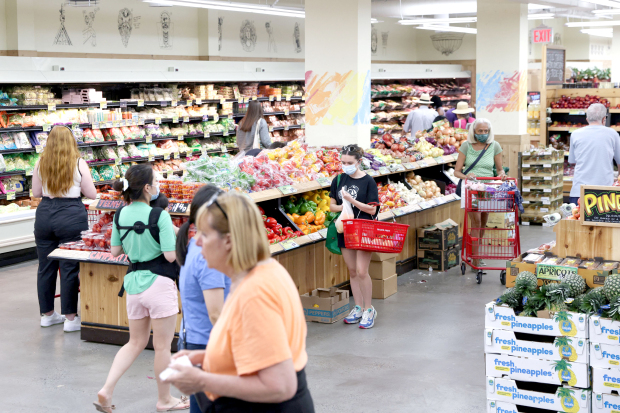 WASHINGTON: US consumer prices accelerated in May as petrol prices hit a record high and the cost of food soared, leading to the largest annual increase in nearly 40-1/2 years, suggesting that the Federal Reserve could continue with its 50 basis points interest rate hikes through September to combat inflation.

The faster-than-expected increase in inflation last month reported by the Labor Department yesterday also reflected a surge in rents, which increased by the most since 1990. The broadening and relentless price pressures are forcing Americans to change their spending habits, and heightened fears of either an outright recession or period of very slow growth.

High inflation, a global phenomenon, also poses a political risk for President Joe Biden and his Democratic Party heading into the mid-term elections in November. A survey yesterday showed consumer sentiment plunged to a record low in early June.

“The Fed now recognises that it is way behind the curve on inflation and must act more decisively,” said Sung Won Sohn, a finance and economics professor at Loyola Marymount University in Los Angeles. “Stagflation is the most likely scenario for the next couple of years, with the probability of a recession rising.”

The consumer price index increased 1.0 per cent last month after gaining 0.3pc in April. Economists polled by Reuters had forecast the monthly CPI picking up 0.7pc.

Petrol prices rebounded 4.1pc after falling 6.1pc in April. Prices at the pump shot up in May, averaging around $4.37 per gallon, according to data from AAA. They were flirting with $5 per gallon yesterday, indicating that the monthly CPI would remain elevated in June.

Food prices jumped 1.2pc, with the cost of food consumed at home shooting up 1.4pc, marking the fifth straight increase of at least 1.0pc. Prices of dairy and related products notched their largest gain since July 2007. Food prices have soared following Russia’s war against Ukraine.

In the 12 months through May, the CPI increased 8.6pc. That was the largest year-on-year increase since December 1981 and followed a 8.3pc advance in April. Economists had hoped that the annual CPI rate peaked in April.

The inflation report was published ahead of an anticipated second 50 basis points rate hike from the Fed next Wednesday. A handful of economists believe a 75 basis points increase is on the table. The US central bank is expected to raise its policy interest rate by an additional half a percentage point in July.

Economists had expected that the Fed would ease back to a quarter point rise in September. But the broad-based increase in underlying inflation left many, including those at Goldman Sachs, expecting another 50 basis points hike in September. The Fed has hiked the overnight rate by 75 basis points since March.

Stocks in Wall Street tumbled. The dollar rose against a basket of currencies. US Treasury prices fell.

Excluding the volatile food and energy components, the CPI climbed 0.6pc after advancing by the same margin in April.

Underlying inflation was fueled by hot rents. Owners’ equivalent rent of primary residence, which is what a homeowner would receive from renting a home, jumped 0.6pc. That was the largest increase since August 1990.

Rents, the biggest single expense for consumers, tend to be sticky and raise the prospect of a wage-price spiral. Record high house prices are forcing many people to remain renters.