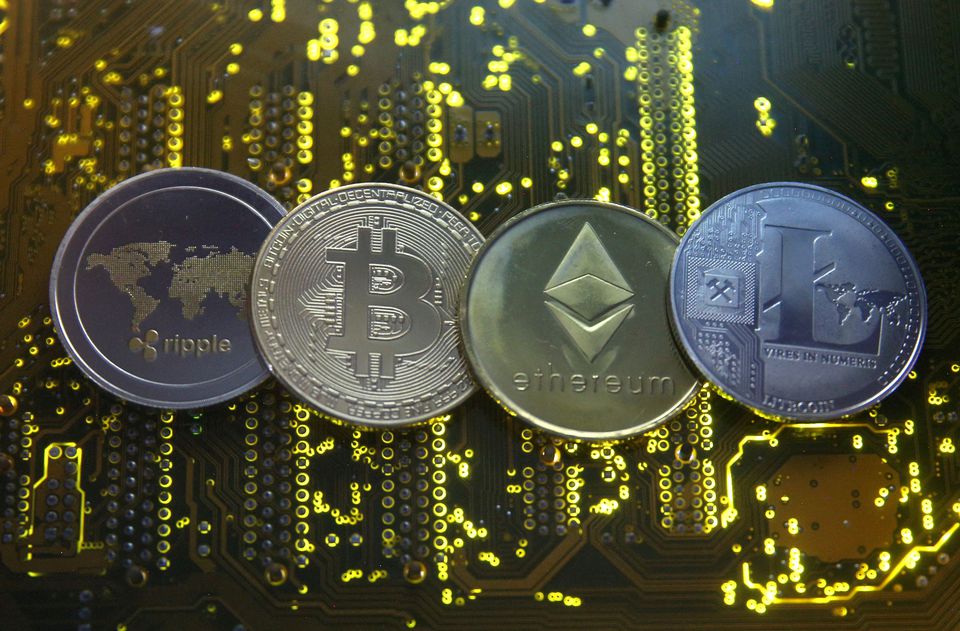 FILE IMAGE: Representations of the Ripple, Bitcoin, Etherum and Litecoin virtual currencies are seen on a PC motherboard in this illustration picture, February 14, 2018. Reuters Illustration Photo

The world's largest cryptocurrency fell 15% on Monday, its biggest one-day drop since March 2020. Bitcoin is down about half this year and over 20% since Friday alone. Since its record high of $69,000 in November, it has slumped nearly 70%.

New Jersey-based Celsius said in a blog post on Monday, citing extreme market conditions, that it had frozen withdrawals and transfers between accounts, "to stabilise liquidity and operations while we take steps to preserve and protect assets".

The move, combined with expectations of sharper US Federal Reserve interest rate hikes after high U.S. inflation data last week, pushed the value of the crypto market under $1 trillion for the first time since Jan. 2021.

Most crypto players were pessimistic on bitcoin's immediate prospects.

"With the broader risk sentiment firmly negative the sellers have had it all their own way for a few days," said Richard Usher at crypto firm BCB Group. "It will take a shift in the overall risk sentiment to turn the price around significantly."

Smaller cryptocurrencies, which tend to track bitcoin's movements, also recovered sharp losses. No. 2 token ether was up 2.4% after losing as much as 10% to $1,075, a fresh 15-month low.

Celsius, which has around $11.8 billion in assets, offers interest-bearing products to customers who deposit crypto at its platform. It then lends out coins to earn a return.

"The market is now panicking about the impact and contagion if Celsius becomes insolvent," wrote Singapore fund manager QCP Capital in a note.

Cryptocurrency investors were already rattled by the collapse of the terraUSD and luna tokens in May which was shortly followed by Tether, the world's largest stablecoin, briefly breaking its 1:1 peg with the dollar.

And higher US inflation has not only roiled cryptocurrencies further but also other asset classes as investors dumped risky assets, with the S&P index falling for four days straight.