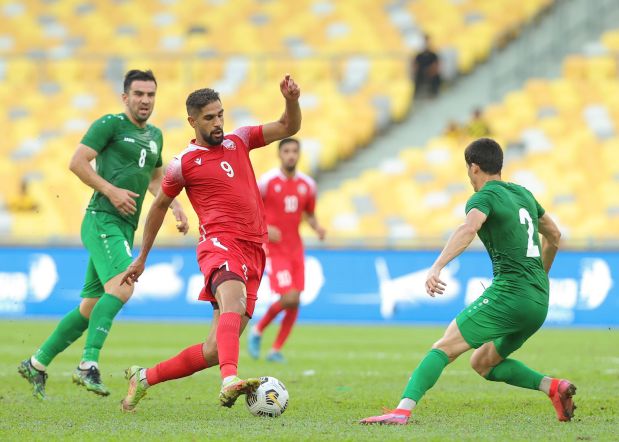 Bahrain have sealed their spot in next year’s Asian Cup Finals with a workmanlike 1-0 victory over Turkmenistan in Kuala Lumpur, writes NADER ADNAN.

The match started brightly yesterday afternoon with the Turkmen threatening as early as the sixth minute with Movlamberdi’s volley flying over the crossbar.

The Turkmen captain Amanov then had a chance to score, his shot deflecting off a Bahraini defender with the subsequent corner kick amounting to little threat.

Bahrain had a chance to take the lead in the ninth minute but were denied by Turkmen keeper Orazmuhammedov. He made an impressive double save minutes afterwards to keep his side on level terms.

Bahrain finally broke the deadlock in the 22nd minute, after the Turkmen keeper brought down Ali Madan in the box. The penalty was slotted home confidently by Abdulla Yusuf Helal.

The Turkmen started the second half strongly, with a chance from Amanov saved by veteran keeper Sayed Mohammed Jaffar early on.

Mohammed Marhoon responded and almost scored, but his shot was denied by a great save from Orazmuhammedov.

With this being their third match in six days, fatigue clearly started to settle in, as both teams struggled to create clear-cut chances.

Marhoon had another chance to score with five minutes to go, but he was once again denied by the Turkmen keeper.

His counterpart Jaffar helped Bahrain keep a clean sheet after making two very late saves in the dying moments of the match to secure a 1-0 win.

After the match, Bahrain coach Helio Sousa said he was delighted with the team’s performance on a muddy pitch in soaring temperatures. “I am very happy,” he added. “The way that the team adapted to the conditions was fantastic.”

After three straight victories and table-topping triumph in the group stages the work has only just began, said the coach, as the country wants to make an impact in next year’s Asian Cup Finals, to be staged at a destination to be confirmed after original hosts China pulled out of hosting the tournament.

“Next is preparation,” added the popular coach. “We will try to have matches against good teams, playing different kinds of football.”