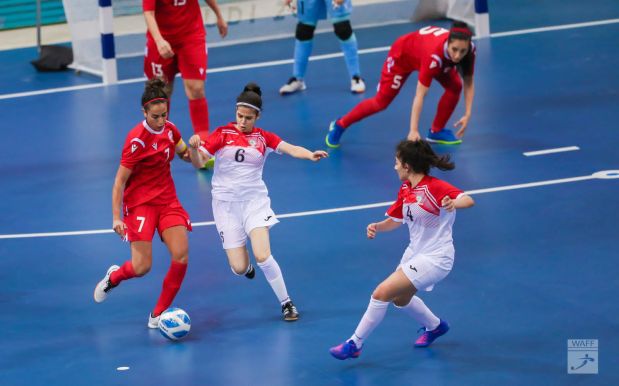 A stunning hat-trick by Hessa Al-Essa was the highlight as Bahrain’s women’s futsal team produced a perfect performance last night.

They roared to a 6-0 victory over Palestine in their opening Group B game of the Third West Asian Football Federation (WAFF) Women’s Futsal Championship 2022 at King Abdullah Sports City Stadium in Jeddah.

“I want to congratulate my players for the way they played,” a delighted Bahraini coach, Brazilian Lino Gomes, told the GDN by phone from Saudi Arabia. “They gave 100 per cent and controlled the game till the end. They thoroughly deserve this victory.”

After an eventful start to the match, with the Palestinians appearing to have the upper hand for the first 10 minutes of the game, the Bahraini women started to wrestle the initiative back but not before their opponents almost managed to breach their defences twice, with the ball being kept out first by a Bahraini defender and, on the second try, by goalkeeper Zahra Nizar.

The momentum started to turn in favour of Bahrain, thereafter, courtesy of a couple of spirited attacks on the Palestinian goal by the agile Shaikha Al-Anoud bint Hamad Al Khalifa.

After seeing her charge down the right flank stopped by a Palestinian defender just when she appeared to only need to beat the goalkeeper, Shaikha Al-Anoud sprinted down the right again in the 16th minute and fired in a shot that flew into the goal past the keeper’s outstretched hand.

Bahrain were now 1-0 up with four minutes still to play in the first 20-minute period.

It soon became 2-0, just a minute later, when Shaikha Al-Anoud repeated her manoeuvre down the right, roaring past opponents, then rocketing the ball towards the goal and seeing it deflect off a defender into the net.

The Palestinians appeared flustered and the Bahrainis took full advantage of their confusion two minutes later with the athletic Al-Essa pouncing on a pass down the middle from captain Yasmine Fayez and sending it soaring into the net for the first of her three goals.

Bahrain went off for the 15-minute half-time break leading 3-0 and, doubtless, feeling confident that they had the match more or less in the bag.

The Palestinians, who had already begun to look a little ragged, must have, doubtless, wanted to take the opportunity to regroup.

But the Bahrainis – and Al-Essa, in particular – had other plans.

The Palestinian dominance of the first period’s initial minutes was now a distant memory as the Bahrainis continued from where they had left off in the first period. Soon after the excellent Palestinian goalkeeper had managed to stave off another Al-Essa attempt at goal, the Bahraini forward returned, literally seconds later, and fired in another right-footed kick that deflected off a defender and snuck into the right-hand corner of the goal.

Bahrain were now 4-0 up with 10 minutes left on the clock.

But Al-Essa wasn’t done for the night. Just a minute later, she sprinted down the Palestinian half again, this time from the left flank and chased down another pass from Fayez which she, then, sent whistling past the goalkeeper.

Her team-mates mobbed her as her hat-trick was announced on the public address system.

Meanwhile, the Palestinian players’ heads had begun to drop and their shoulders drooped with the clock ticking closer to the end of the match.

But their misery hadn’t ended yet. With three minutes to go to full time, captain Fayez sent another pitch-perfect pass screeching past the Palestinian defenders leaving a quick Manar Ibrahim plenty of time to line up her shot and send the ball screaming past the goalkeeper into the net for Bahrain’s sixth, and final, goal of the night.

The resounding victory was all the more special, Gomes said, because it was the first game of the tournament and Bahrain had needed to get off to a winning start.

“Also, we didn’t know very much about the Palestinian team,” he added. “We had no information, knew nothing about them, about how they play. That’s why we were a bit cautious in the first few minutes of the game – that’s because we were trying to observe their tactics, how they play. After that, we knew what we had to do.”

Bahrain will take on Iraq tomorrow in their second, and final, group game. The top two teams from Group B will qualify for the semi-finals where they will face the top two finishers from Group A, which features hosts Saudi Arabia, Oman and Kuwait.