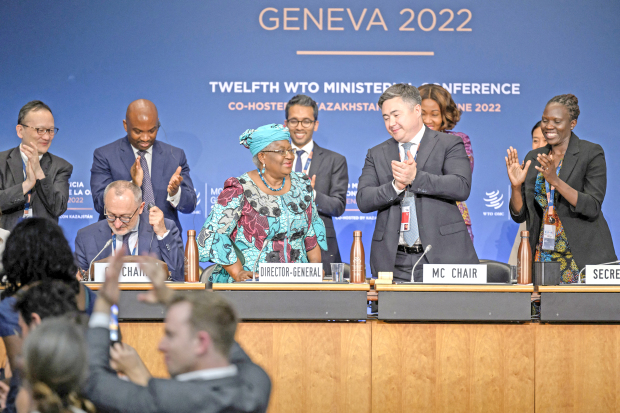 GENEVA: The World Trade Organisation (WTO)agreed on the first change to global trading rules in years yesterday as well as a deal to boost the supply of Covid-19 vaccines in a series of pledges that were heavy on compromise.

The deals were forged in the early hours of the sixth day of a conference of more than 100 trade ministers that was seen as a test of the ability of nations to strike multilateral trade deals amid geopolitical tensions heightened by the Ukraine war.

Delegates, who had expected a four-day conference, cheered after they passed seven agreements and declarations just before dawn yesterday.

Director-general Ngozi Okonjo-Iweala told them: “The package of agreements you have reached will make a difference to the lives of people around the world. The outcomes demonstrate that the WTO is in fact capable of responding to emergencies of our time.”

Earlier she had appealed to WTO members to consider the “delicate balance” required after nearly round-the-clock talks that have at times been charged with anger and accusations.

The package, which the WTO chief called “unprecedented”, included the two highest profile deals under consideration – on fisheries and on a partial waiver of intellectual property (IP) rights for Covid-19 vaccines.

The accord to curb fishing subsidies is only the second multilateral agreement on global trading rules struck in the WTO’s 27-year history and is far more ambitious than the first, which was designed to cut red tape.

At one stage, a series of demands from India, which sees itself as the champion of poor farmers and fishermen as well as developing countries, appeared set to paralyse talks but accommodations were found, trade sources said.

The WTO’s rules dictate that all decisions are taken by consensus, with any single member able to exercise a veto.

“It was not an easy process. There were a lot of bumps, just like I predicted. It was like a roller coaster, but in the end we got there,” an exhausted but elated Okonjo-Iweala told a final news conference.