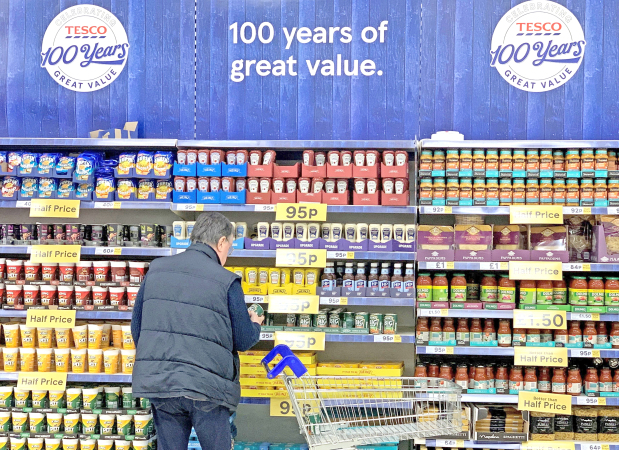 FLASHBACK: A man looks at products on a shelf inside a Tesco Extra superstore near Manchester

Pessimism weighing on Britain’s households has hit unprecedented levels, as wages struggle to keep pace with inflation that reached nine per cent in April and is heading for double digits. Food inflation is predicted to hit 15pc this summer.

“We are seeing higher frequency shopping trips, so there’s an elevation in the number of shopping trips, we are seeing basket sizes coming down a little bit,” Tesco chief executive Ken Murphy told reporters after Tesco reported a fall in underlying UK sales in its first quarter.

Britain’s biggest retailer, which has an over 27pc share of the UK grocery market, said it was also seeing early signs of customers opting for cheaper products in areas of significant inflation.

“Those staples like pasta, bread and beans is where we’re seeing customers choose to trade down to the entry level or the core own brand level product,” he said.

Murphy highlighted Tesco’s convenience store business and Booker wholesale division as trading well in the crisis and said the group won market share in all its markets.

But he said Tesco’s observations on the changing trading dynamics came with a “health warning”, given that the product mix change across the business was so far less than 1pc.

Tesco and Britain’s No. 2 grocer Sainsbury’s have previously warned of a hit to profits this year as they plough cash into keeping prices competitive to deter customers from switching to German-owned discounters Aldi and Lidl.

Tesco maintained its full-year profit guidance despite reporting a 1.5pc drop in underlying UK sales over the 13 weeks to May 28, broadly in line with analysts’ forecasts. They had fallen 1.2pc in the previous quarter.

Murphy vowed to work with suppliers to mitigate the impact of inflation as much as possible and support customers who are facing the most difficult economic conditions in decades.

The Bank of England stuck to its gradual increases in interest rates on Thursday but said it was ready to act “forcefully” if needed to stamp out dangers posed by inflation it now sees topping 11pc.

A raft of industry data shows that consumers are looking to cut spending by removing more expensive meat and fish from the shopping list, reducing the amount of car journeys they make and cancelling music and TV subscriptions and repair warranties on domestic appliances.

Tesco’s shares have fallen 14pc so far this year but most analysts consider it best placed amongst Britain’s major supermarket groups to navigate the downturn due to its buying power.