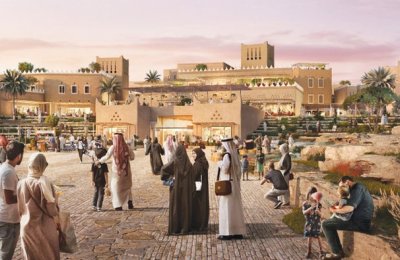 Diriyah Gate Development Authority’s (DGDA) said the first phase masterplan of its giga-project coming up in Saudi Arabia has been awarded platinum-level precertification for the Leadership in Energy and Environmental Design (Leed) accreditation by the United States Green Building Council (USGBC).
Diriyah, located within Riyadh province, just 15 minutes north-west of the capital's city centre, is being developed by DGDA into Saudi Arabia’s foremost historical, cultural and lifestyle destination. As part of the Kingdom’s 2030 Vision, 14 sq km of Diriyah will be transformed into one of the world’s foremost historic tourism destinations.
The USGBC’s Leed certification is a globally recognised, prestigious symbol of sustainability achievement and leadership, providing a framework for healthy, efficient and cost-saving green buildings and is the world’s most widely-known sustainability certification scheme.
Leed certification can be achieved at different levels: the building, neighbourhood, community and city levels. The first phase of the Diriyah development has targeted the certification at both the building and city levels.
The precertification of Leed for buildings and cities at a platinum level shows that the development has sustainability at its very core, and is integrated into every aspect of its planning, design, construction and operation phases.
Announcing the key achievement, DGDA said this forms a part of Diriyah’s wider sustainability strategy, incorporating human-centric, economic and societal sustainability alongside environmental considerations.
Diriyah has also recently introduced major initiatives, including, improving the circular economy and waste management practices, maintaining, and improving biodiversity, monitoring the environmental footprint, and implementing social and economic initiatives that support sustainable mobility, health and wellbeing and the development of the local economy, it stated.
DGDA said it was ensuring that the development was pedestrian-oriented to keep Diriyah a city rooted in an authentic representation of the past, while also reducing the overall fuel emissions and carbon footprint of the development.
Group CEO Jerry Inzerillo said: "I am thrilled that our efforts have been recognised by the Leed precertification as climate and nature-related considerations are at the heart of our development."
"With regenerative tourism and a people first development at the epicenter of our philosophy, we want to ensure that Diriyah is a shining example when it comes to sustainability standards internationally, and will result in a highly liveable, pedestrian city," he noted.
Further to this, the first phase of DGDA’s master plan will be built entirely in the Najdi architectural style, which will make use of locally sourced materials, including traditionally made mud bricks and limestone from Saudi Arabia, he added.
According to him, Diriyah is the ultimate wellspring and source of a civilization, and DGDA's sustainable approach, rooted in a reverence of the city’s past and origins, has now been authenticated by this major accolade and proof point.
Diriyah has also enrolled in Saudi Arabia’s own sustainability certification programme: Mostadam, which is directly linked with achieving the Vision 2030 objective of improving quality of life for all Saudis.
Diriyah’s large local community remains DGDA’s top priority as the development moves forward, which involves ensuring that local residents can live, work and play in a way that supports their health, prosperity and wellbeing, he added.
Mohamed Saad, the Acting DevCo President for DGDA, said the significance of Diriyah’s preliminary Leed accreditation cannot be overstated and has involved input from every portion of DGDA.
"Thanks to this large collaborative effort, we are well on our way to demonstrating to the world that our development is comprehensively sustainable at every level," he added.-TradeArabia News Service