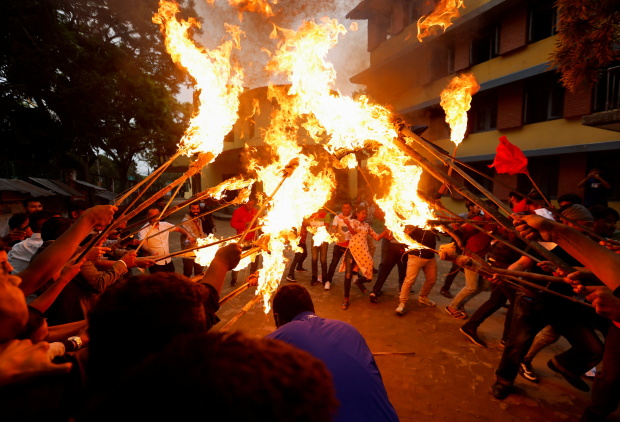 Students affiliated with the main opposition party hold a torch rally during the protest against the rise in fuel prices in Kathmandu, Nepal June 20, 2022. Reuters Photo

KATHMANDU: Police in Nepal's capital fired teargas and charged at protesters with sticks on Monday to break up a demonstration by students against fuel price hikes, officials and witnesses said, in a sign of growing public discontent over rising inflation.

State-owned monopoly Nepal Oil Corporation (NOC) on Monday raised the price of one litre of petrol and diesel by 12% and 16% respectively, prompting fears of broader price hikes.

Around 100 protesters from the All Nepal National Free Student Union (ANNFSU), the student wing of the main opposition Nepal Communist Party (Unified Marxist-Leninist) clashed with police after they were stopped from rallying in Kathmandu.

"This is an act of the government's sheer irresponsibility," Girish Thagunna, a protester, told Reuters, referring to the price hike. "This is wrong and should be withdrawn immediately."

Dinesh Mainali, a police official, said protesters threw stones and damaged a police vehicle but that there were no injuries or arrests.

Fares for public transport and goods vehicles had been increased by up to 7.7% following the fuel price increase, local authorities said.

Nepal's 29 million people are facing a surge in food and energy prices, raising the risk of social unrest. Annual retail inflation accelerated to a six-year high of 7.87% in mid-May.

Supplies Minister Dilendra Prasad Badu told a parliamentary committee on Monday that the hike was necessary because of an increase in global oil prices and to help the loss-making NOC to pay for imports.