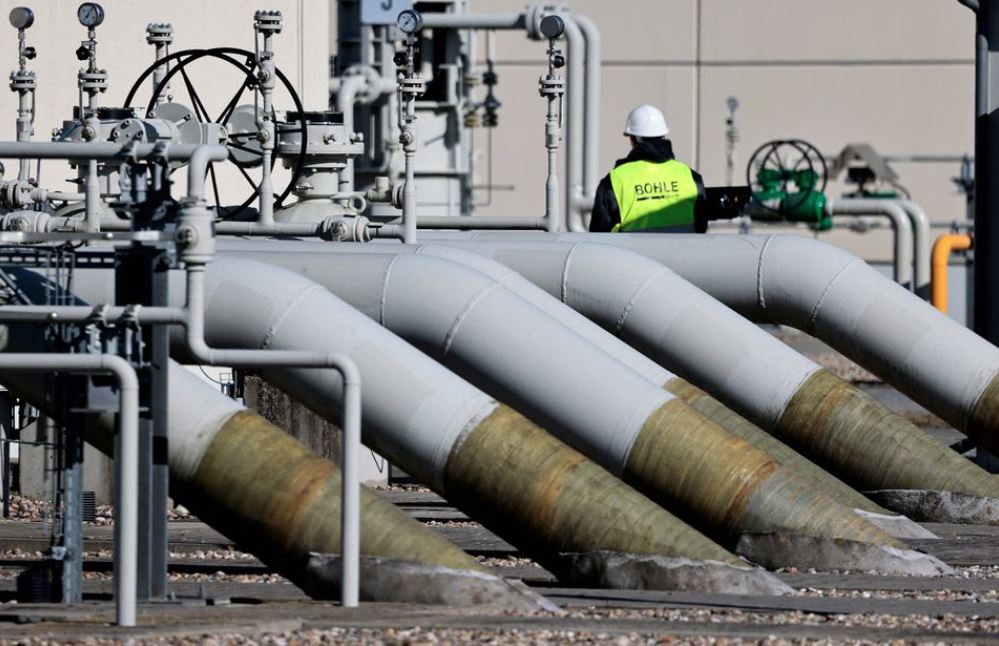 Pipes at the landfall facilities of the 'Nord Stream 1' gas pipeline are pictured in Lubmin, Germany. Reuters File Photo

BERLIN- Germany triggered the "alarm stage" of its emergency gas plan on Thursday in response to a drop in Russian supplies but stopped short of allowing utilities to pass on soaring energy costs to customers in Europe's largest economy.

The measure is the latest escalation in a standoff between Europe and Moscow since the Russian invasion of Ukraine that has exposed the bloc's dependence on Russian gas supplies and sparked a frantic search for alternative energy sources.

The decision, announced by Germany's economy minister, marks a stark shift especially for Europe's largest economy, which has cultivated strong energy ties with Moscow stretching back to the Cold War.

The government activates the Phase 2 "alarm stage" of a three-stage emergency plan when it sees a high risk of long-term supply shortages of gas and theoretically allows utilities to pass on high prices to industry and households and thereby help to lower demand.

Germany's gas buyers and utilities have been pushing for phase 2 for that reason, industry sources said.

Facing dwindling gas flows from main supplier Russia, Germany has since the end of March been at Phase 1 of its emergency plan, which includes stricter monitoring of daily flows and a focus on filling gas storage facilities.

A move to the next phase has been the subject of speculation since Russian supplier Gazprom cut flows via the Nord Stream 1 pipeline to just 40% of capacity last week, blaming a delay in return of serviced equipment because of sanctions.

In the second stage, the market is still able to absorb missing volume without the need for state intervention that would kick in the final emergency stage.

Several European countries have outlined a series of measures to withstand a supply crisis to tackle worries about winter energy shortages and an inflation spike that could test Europe's resolve to maintain sanctions on Russia.

It has also driven German to contemplate painful cuts to their output and resorting to polluting forms of energy previously considered unthinkable as they adjust to the prospect of running out of Russian gas.

The European Union on Wednesday accused Russia of "rogue moves" on cutting gas and signalled it would temporarily turn to coal to plug energy shortfalls. Russia has denied the gas supply cuts were premeditated.

Gazprom said it was cutting flows via Nord Stream 1 last week, in what could be developing into a diplomatic headache centring around a turbine sent to Canada for repairs.

A giant Siemens Energy gas turbine used in Nord Stream manufactured in Canada was sent back there for maintenance. Canadian officials have expressed concern about running afoul of sanctions on Moscow, which make it impossible for Siemens to receive the pipeline part.

The G7 is likely to discuss the fate of the turbine at their meeting beginning Sunday, Canada's Natural Resources Minister Jonathan Wilkinson told Reuters, citing Germany's concerns about gas supply.

"I'm sure it'll come up at least in the corridors of the G7," he said. "I wouldn't hold my breath that we're going to find a resolution before the end."