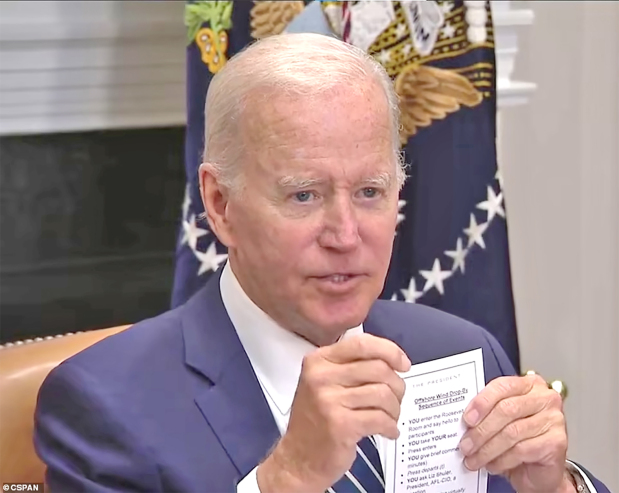 Joe Biden has accidentally revealed a cheat sheet giving him basic commands about where to sit and what to do during a meeting with wind industry executives at the White House.

The president mistakenly showed photographers the list of instructions that said ‘take YOUR seat’, ‘YOU give brief comments’ and ‘YOU depart’.

The 79-year-old was also instructed to speak to specific attendees, ask them questions and thank them before leaving.

It is not the first time Biden appears to have been caught using a cheat sheet, after he was spotted with ready-made answers for the media during a talk on Ukraine earlier this year.

The mess up was the latest in a series of gaffes that have included him losing his balance and falling over in public as well as saying what he should not.

During the meeting with wind industry executives in the Roosevelt Room at the White House, Biden flashed the eight-point plan for how to conduct himself to photographers.

Rather than refer to ‘The President’ by name, whoever typed up the note had clearly intended it to be for presidential eyes only and instead referred to Biden as ‘YOU’, in bold, upper case lettering.

The detailed instructions were titled ‘Offshore Wind Drop-By Sequence of Events’ and told Biden to ‘enter the Roosevelt Room and say hello to participants.’

The strip of paper told him to sit down: ‘YOU take YOUR seat’, it instructed. The note then told the president to speak once the reporters had been brought into the room: ‘YOU give brief comments (2 minutes).’

After the reporters departed, Biden was told to speak to some of those present at the meeting. ‘YOU ask Liz Shuler, President, AFL-CIO, a question’ and then ‘YOU thank participants’ and ‘YOU depart.’

The meeting went down without further incident but afterwards eagle-eyed photographers quickly realised what the President had revealed.