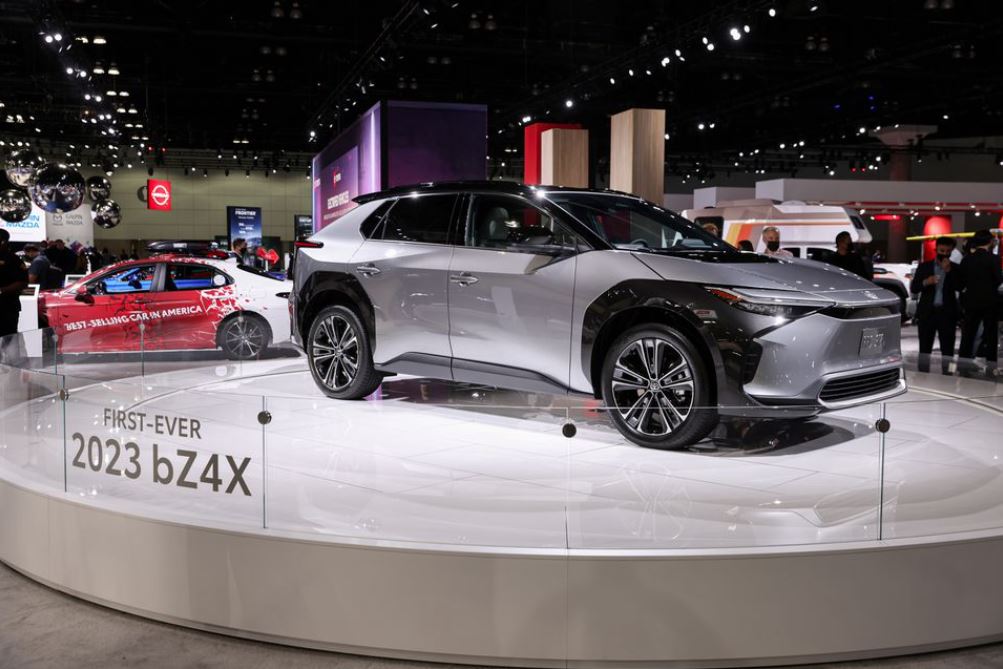 Toyota Motor Corp said on Thursday it would recall 2,700 of its first mass-produced electric vehicles (EVs) for the global market because of a risk the wheels could come loose.

The world's largest automaker by sales submitted the recall of the bZ4X SUVs to Japan's transportation ministry. Of the 2,700 vehicles, 2,200 were earmarked for Europe, 260 for the United States, 10 for Canada and 110 for Japan, the company said.

Subaru Corp also said Thursday it was globally recalling about 2,600 units of the Solterra, its first all-electric vehicle jointly developed with Toyota, for the same reason.

Japan's safety regulator said sharp turns and sudden braking could cause a hub bolt to loosen, raising the risk of a wheel coming off the vehicle. It said it was not aware of any accidents being caused by the defect.

The regulator advised drivers to stop using the vehicle until a more "permanent" repair measure was in place.

All of the cars recalled in Japan had not yet been delivered to customers as they were meant for test drives and display, spokespeople of the automakers said.

"We sincerely apologise for any inconvenience this causes you," Toyota said on its website. "We would have repaired it as soon as possible, but we are investigating the details."

A Toyota spokesperson said not every model was subjected to the recall but declined to say how many it has built overall.

For Subaru, most of the vehicles were for dealers and none were delivered to customers in the U.S., a Subaru spokesperson said.

The recall comes less than two months after Toyota, a relative latecomer to the EV market, rolled out the electric SUV, bZ4X, to the domestic market, albeit as a lease-only option.

Toyota has been criticised by some investors and environmental organisations for not acting quickly enough to phase out gasoline-powered cars and embrace EVs instead.

The company has repeatedly pushed back against the criticism, arguing the necessity to offer a variety of powertrains to suit different markets and customers.

Gasoline-electric hybrid models remain far more popular in Toyota's home market than EVs, which accounted for just 1% of the passenger cars sold in Japan last year, based on industry data.

Still, the market is growing fast and foreign automakers including Tesla Inc are making visible inroads on the streets of cities such as Tokyo.