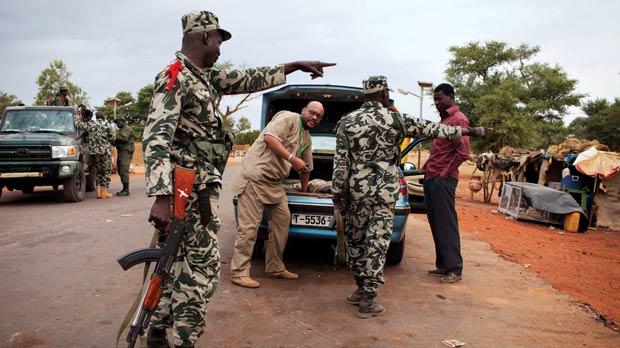 Malian soldiers searching a vehicle at a military checkpoint in Sevare. (Reuters Photo)

Bamako: Three Malian troops were killed Friday after jihadist fighters ambushed them in the centre of the country, military sources said.

The three were part of a unit escorting a convoy from Gao in the north to the central town of Douentza, a military source told AFP from Gao.

The ambush occurred not far from the town of Boni, which jihadists briefly seized control of last week before troops retook it with backup from UN peacekeepers.

"Heading back towards Gao, between Douentza and Boni, they were ambushed. Three died," the source said on condition of anonymity.

A separate military source in Douentza confirmed the deaths, saying that "a large delegation of army general staff were on a mission in the region when it (the ambush) happened".

Security minister, General Salif Traore, last Monday promised a beefing up of military protection in the region following the Boni attack and other attacks on government and military sites in recent months.

Northern Mali fell under the control of jihadist groups linked to Al Qaeda in early 2012.

Ongoing international military intervention since January 2013 has driven Islamist fighters away from major urban centres which they had briefly controlled.

But despite a peace accord last year, large tracts of Mali are still not controlled by domestic or foreign troops, and jihadist groups have over the past year carried out attacks in central Mali as well as back in the long-troubled north.