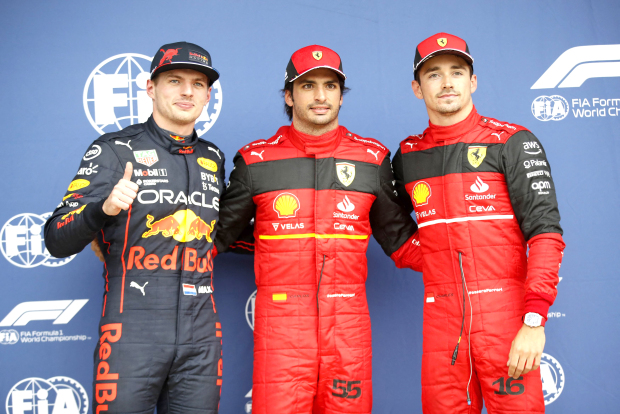 The Spaniard, who will be starting his 150th race today at Silverstone, put in a last-gasp effort of one minute 40.983 seconds with Verstappen ending up 0.072 slower after looking set for pole.

“I didn’t expect that one,” said Sainz over the radio as he slowed down.

Ferrari’s Charles Leclerc qualified third through the rain and spray.

Sainz, 27, said he had struggled with the standing water on the racing line and feared spinning.

“In the end I put together a lap that I thought was nothing special but I just put it on the board and see how it is, and it was pole position, which came as a bit of a surprise,” he added. “I had no idea where I was going to qualify because the conditions were so changeable.”

The Spaniard has yet to win a grand prix but, with Ferrari expected to have strong race pace, felt that was also achievable.

World champion Verstappen spun in the final session before going fastest and was booed by some of the crowd during the post-qualifying interviews, a lingering echo of last year’s fierce title battle with Hamilton.

The pair collided at Silverstone in 2021, with the Dutch driver retiring, but Verstappen denied Hamilton a record eighth title in controversial circumstances at the season-ending Abu Dhabi race.

“It was quite a tricky qualifying, with the rain,” said Verstappen, who was fastest in the first two sessions but had to slow in the end due to a yellow flag.

“It was raining, drying, so you had to be in the track at the right time. I think overall the car was working really well... I think still to be on the front row is very good for us and we have a good race car in the dry and in the wet.”

Verstappen is 46 points clear of closest rival Perez after nine of 22 races, with Red Bull chasing their seventh successive victory.