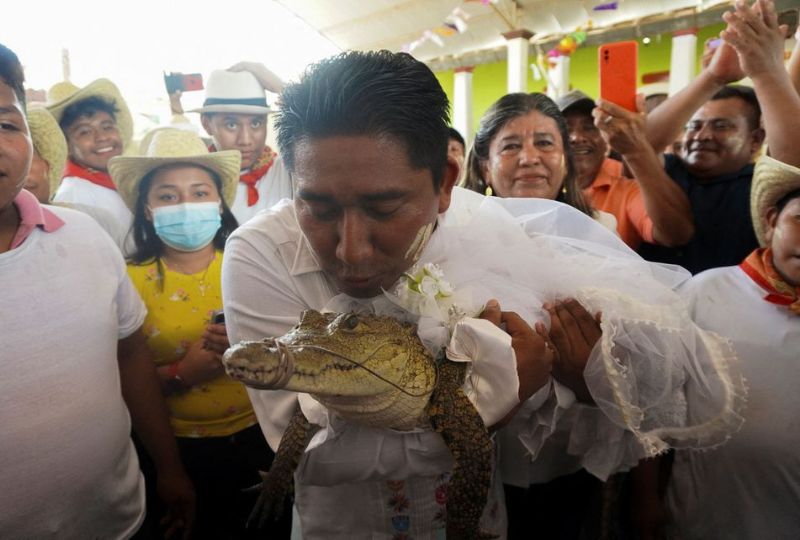 SAN PEDRO HUAMELULA, Mexico - A small town Mexican mayor married his alligator bride in a colorful ceremony as traditional music rang out and revelers danced while imploring the indigenous leader to seal the nuptials with a kiss.

San Pedro Huamelula Mayor Victor Hugo Sosa obliged more than once during Thursday's wedding, bending down to plant his lips on the small alligator's snout, which had been tied shut presumably to avoid unwanted biting.

The ritual marriage likely dates back centuries to pre-Hispanic times among Oaxaca state's Chontal and Huave indigenous communities, like a prayer pleading for nature's bounty.

"We ask nature for enough rain, for enough food, that we have fish in the river," said Sosa, mayor of the small fishing village on Oaxaca's steamy Pacific coast.

Oaxaca, located in Mexico's poor south, is arguably the country's richest in indigenous culture and home to many groups that have stubbornly maintained their languages and traditions.

The age-old ritual in San Pedro Huamelula, now mixed with Catholic spirituality, involves dressing the alligator or caiman in a white wedding dress plus other colorful garments.

The seven-year-old reptile, referred to as a little princess, is believed to be a deity representing mother earth, and her marriage to the local leader symbolizes the joining of humans with the divine.

As trumpets blared and drums provided a festive beat, locals carried the alligator bride in their arms through village streets as men fanned it with their hats.

"It gives me so much happiness and makes me proud of my roots," said Elia Edith Aguilar, known as the godmother who organized the wedding.

She said that she feels privileged to be entrusted with carrying out the ceremony, and noted she spent a lot of time fretting over what the bride would wear.

"It's a very beautiful tradition," she added with a smile.

A small town Mexican mayor married his alligator bride in an age-old ritual that likely dates back centuries to pre-Hispanic times https://t.co/jwKquP6RxD pic.twitter.com/vZzu0sewmB