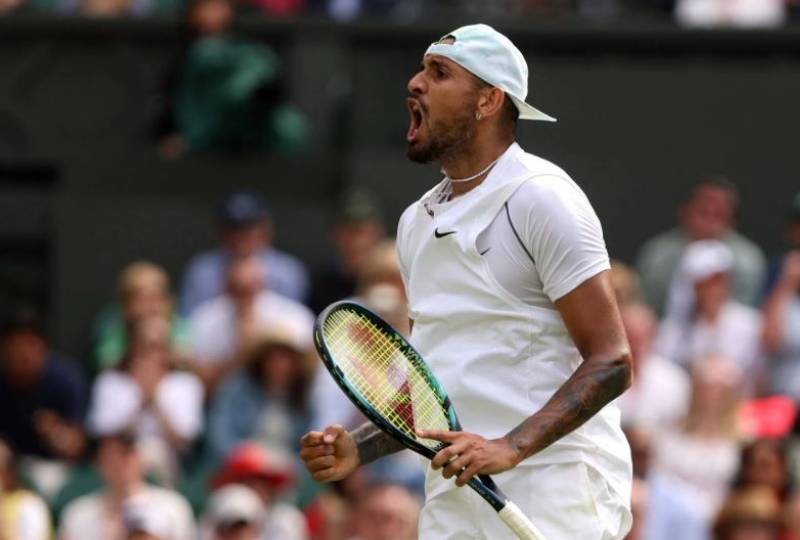 FILE PHOTO; Australia's Nick Kyrgios reacts during his fourth round match against Brandon Nakashima of the US. Reuters Photo.

LONDON: An angelic Nick Kyrgios reached his first Grand Slam quarter-final for seven years when he recovered from a slow start to beat steady American Brandon Nakashima in five sets on Wimbledon's Centre Court on Monday.

With Kyrgios's bad-tempered Court One victory over fourth seed Stefanos Tsitsipas still the talk of the town, the Australian was on his best behaviour in front of the Royal Box as he ground out a 4-6 6-4 7-6(2) 3-6 6-2 win.

Unseeded Chilean Cristian Garin awaits in the last eight after edging out Kyrgios's compatriot Alex De Minaur, offering Kyrgios a golden opportunity to surpass his quarter-final run at Wimbledon on his debut in 2014 when he stunned Rafa Nadal.

After the mayhem and toxic atmosphere of Saturday, when Kyrgios was accused by Tsitsipas of being a bully, he let his tennis do the talking against the 20-year-old Nakashima, barely uttering a word in anger throughout a contest that contained few of the fireworks usually associated with the Australian.

While his tennis did not reach the heights he managed against Tsitsipas and at times he struggled physically, Kyrgios still struck 61 winners, 31 of which were aces.

"It wasn't near my best performance, level wise, but I'm just super, super happy to get through," Kyrgios, who has now won 11 of 14 five-set matches, said on court.

"I've never lost a fifth set here. Honestly, that's what I was thinking about. I was like, I've been here before I've done it before and I came through again."

Asked about facing Garin, he said: "I'm not going to think about that. I'm going to need a glass of wine tonight for sure."

Kyrgios entertained the capacity crowd with some tweeners in the warm-up and even practised some under-arm serves.

But they were few and far between in a three hour 10 minute match that was absorbing rather than exciting.

If anything the world number 40 looked subdued in the opening set and appeared to be bothered by a stiff shoulder.

Two lazy forehand errors at 4-5 gifted Nakashima the opening set as Kyrgios, whose last Grand Slam quarter-final saw him lose to Andy Murray at the 2015 Australian Open, looked in danger of an anti-climactic exit.

But he broke serve for 2-1 in the second set and, after having treatment on his shoulder at the changeover, gradually cranked up the power gauge to level the match.

Nakashima's focus was total though as the American kept his nose in front in the third set and his no-nonsense approach brought him to within two points of taking the set when Kyrgios again served at 4-5.

This time Kyrgios blasted his way out of trouble and, after another love service hold to get into a tiebreak, he turned on the style, hitting two scorching winners, one on each wing, to move within one set of victory.

Nothing is ever quite what it seems though with Kyrgios on court and just when he looked in control he suddenly went off the boil and dropped serve twice in succession as Nakashima took it into a decider.

At that stage, with Kyrgios finally starting to chunter to his box, Nakashima looked a good bet to become the youngest American man to reach the last eight here since Andy Roddick, also 20, managed it in 2003.

Kyrgios held from 0-30 to make it 1-1 and then flicked the switch, breaking twice as he raced away towards victory, sealing it with a silky volley.