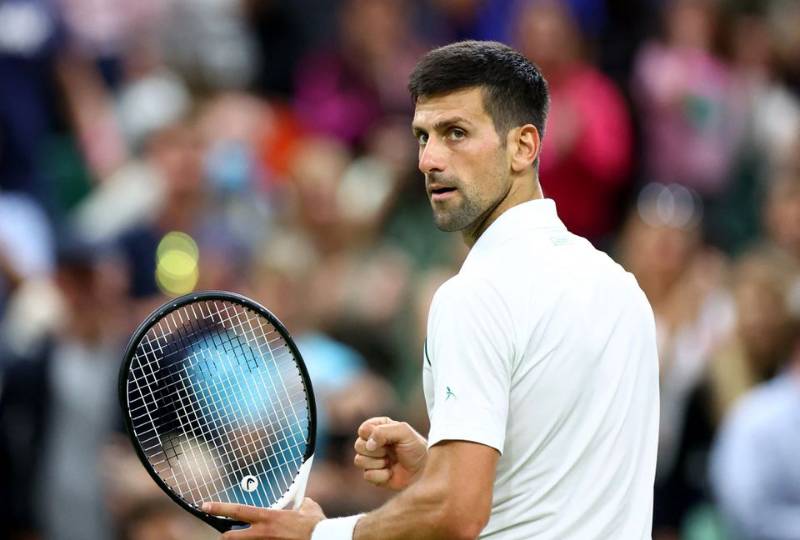 LONDON:  Novak Djokovic has said the late start times on the All England Club's two main showcourts is effectively turning Wimbledon into an indoor tournament for the players scheduled to contest the day's final matches in those arenas.

The reigning champion beat wildcard Tim van Rijthoven in four sets under the Centre Court lights on Sunday, setting up a quarter-final against young gun Jannik Sinner in a match that finished at about 10.40pm local time (2140 GMT).

"I don't see a reason why there wouldn't be an earlier start," Djokovic told reporters, referring to the 1pm and 1.30pm local start times on No.1 Court and Centre Court respectively.Action on the remaining courts starts at 11am.

"If you're scheduled last on the Centre, you're going to end up a match under the roof, which changes the conditions, the style of play, the way you move on the court. It's more slippery. The lights.

"It's really an indoor tournament in most of the cases when you're scheduled last on Centre or Court One."

Sally Bolton, the CEO of organisers the All England Club (AELTC), on Monday defended Wimbledon's scheduling and said there were currently no plans to bring start times forward.

"The reality of running a tennis event is that once you start the day, you have no idea when the day is going to finish," she told reporters, adding that there were no plans to move into night sessions. "It is pretty unpredictable.

"I think it's understandable that players are providing feedback on the experience that they're having at the Championships and of course we take account of all of that as we think about the way in which we plan our days.

"There haven't been significant changes to the schedule, we will always take account of the feedback we receive and look at what we do."

The start of Djokovic's match on Sunday was further delayed by a ceremony marking the centenary of Centre Court involving a parade of champions.

"Of course today it was a special occasion," the six-times Wimbledon champion added.

"For me it was an honour. I was very happy to be part of it. It's one of those unique moments that you get to live as a tennis player, and I'll cherish it.

"But I think most of the players would probably agree that we would all want the start of the match on Centre Court pushed earlier."

While much later finishes are common at the Australian and U.S. Opens, Wimbledon was unable to host matches after dark until the retractable roof and floodlights were installed on Centre Court for the 2009 championships.

This year play was scheduled over all 14 days of the tournament, bringing an end to the tradition of a day off on the middle Sunday to allow the grass courts to recover.

Djokovic said that while he respected the traditions of the tournament, the changes illustrated that alterations could be made to the schedule.

"Since there are some changes this year that we never thought we'd see in Wimbledon, why not move it for half an hour, one hour earlier?" he said. "I think it would be quite helpful to finish matches maybe not using the roof."