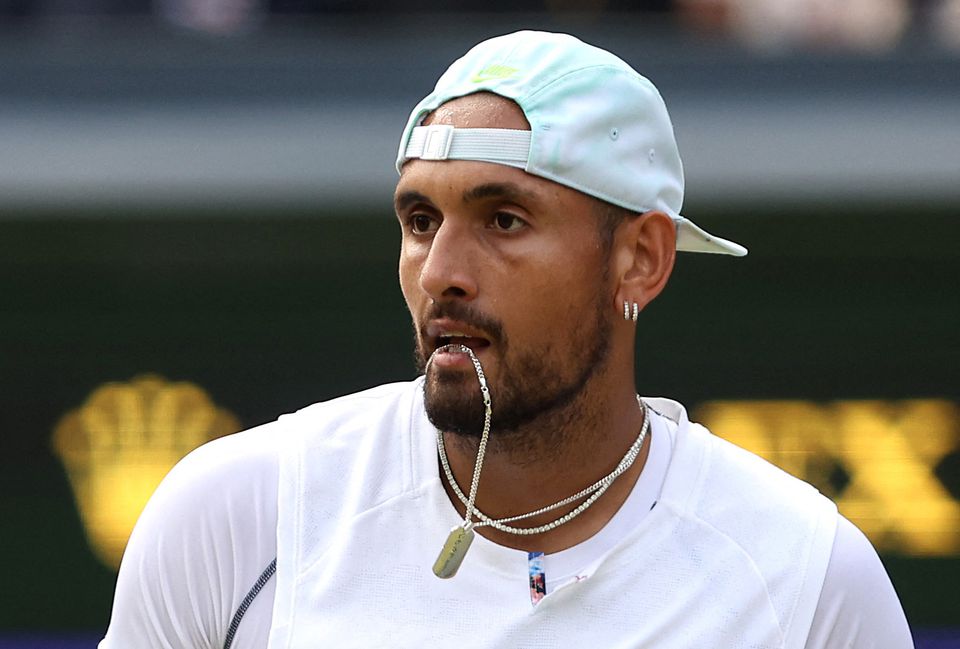 FILE PHOTO: Australia's Nick Kyrgios reacts during his fourth round match against Brandon Nakashima of the US. Reuters Photo.

A statement from Australian Capital Territory Policing did not identify Kyrgios but The Canberra Times quoted the lawyer of the former world number 13 as saying that the charge was related to a "domestic relationship".

"ACT Policing can confirm a 27-year-old Watson man is scheduled to face the ACT Magistrates court on the 2nd of August in relation to one charge of common assault following an incident in December 2021," the police said.

Australian media said the charge was related to a complaint made by Kyrgios's former partner Chiara Passari.

"It's in the context of a domestic relationship," Kyrgios's barrister Jason Moffett was quoted as saying by The Canberra Times.

"The nature of the allegation is serious, and Mr Kyrgios takes the allegation very seriously. Given the matter is before the court... he doesn't have a comment at this stage, but in the fullness of time we'll issue a media release."

Moffett did not respond to requests for comment while an email sent to Kyrgios's representative was not answered.

The 27-year-old is set to face Chile's Cristian Garin on Wednesday in the men's quarter-finals at Wimbledon.

Wimbledon organisers, the All England Club, said they have been made aware of Kyrgios's situation but would not comment as legal proceedings are ongoing.

"We are in touch with Nick's team and he remains scheduled to play his quarter-final match tomorrow," an All England Club spokesperson said.

The Australian has been fined a total of $14,000 during this year's grasscourt major for two offences -- spitting towards a fan after his first-round win and then for swearing in a fiery third-round clash with Stefanos Tsitsipas.

"The ATP is aware of the Australian case involving Nick Kyrgios but as legal proceedings are ongoing it would be inappropriate to comment further at this time," the men's governing body ATP told Reuters by email.

In October last year, Kyrgios and his former model girlfriend Passari were moved to separate rooms in their Adelaide quarantine hotel after an argument.

An undeniable talent, Kyrgios can beat any top player when in form and in the mood but he has a long list of previous brushes with the tennis authorities.

Not since the days of John McEnroe's tantrums has a player polarised opinion as much as Kyrgios and there is always a buzz surrounding the maverick Australian, whether it be on court or at his media conferences.

Greece's world number five Tsitsipas labelled Kyrgios a "bully" with "an evil side" to his character after losing their bad-tempered Wimbledon clash last week.