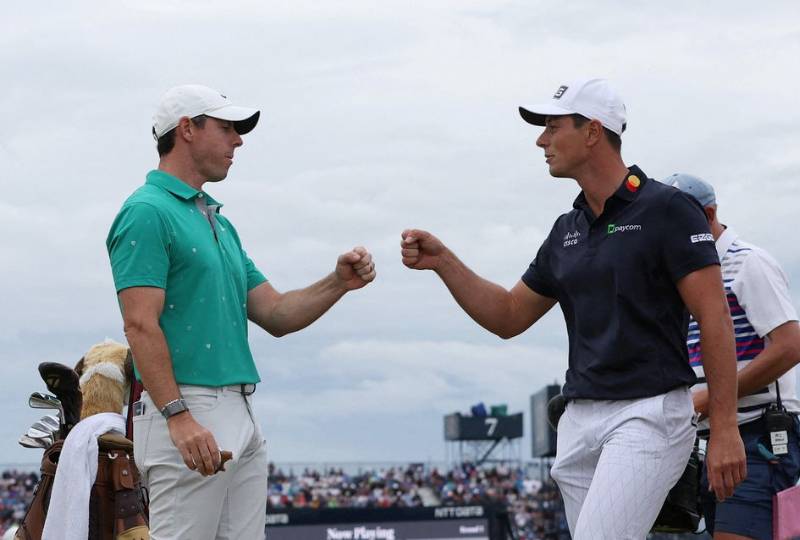 FILE PHOTO: Northern Ireland's Rory McIlroy and Norway's Viktor Hovland celebrate on the 10th during the third round after scoring an eagle and a birdie respectively. Reuters Photo.

ST ANDREWS: Rory McIlroy and Viktor Hovland were locked together four shots clear at the top of the British Open leaderboard after taming St Andrews with matching third rounds of 66 on Saturday.

Norwegian Hovland made a fast start with four birdies in a row from the third before Northern Ireland's McIlroy chipped in from a greenside bunker to eagle the 10th hole and edged ahead with a birdie on 14.

McIlroy dropped a shot at the notorious 17th Road Hole, his only bogey of the day, and the Ryder Cup team mates both birdied the last to finish on 16-under-par before embracing warmly as the packed galleries gave them a rousing ovation.

They will play together again on Sunday when McIlroy, 33, will bid for his fifth major title and the 24-year-old Hovland his first.

"I thought it was really good," McIlroy told reporters "I missed some opportunities early. But stayed really patient. And I feel like my patience was rewarded around the turn with a couple of birdies and that hole-out on 10.

"Overall, a really good day. We sort of fed off each other, and navigated the last few holes well," said McIlroy who has not won a major since 2014.

Hovland is aiming to become the first Norwegian to win a major title and cannot imagine a better venue to do it than the home of golf.

"I don't think there's any other place that would top it," he said. "Growing up in Norway and always watched The Open Championship. To win a major that's closest to home, that would be really cool."

Australian Cameron Smith and American Cameron Young were the leaders' closest challengers on 12-under.

Smith, the overnight leader, struggled to find the momentum he rode to opening rounds of 67 and 64 and battled hard for his 73.

Young, who shot a first-round 64 to lead his first British Open, also lacked inspiration in a grinding 71.

South Korean Kim Si-woo moved into contention on 11-under with a tidy round of 67, level with world number one Scottie Scheffler who carded 69.

Twice major champion Dustin Johnson finished at 10-under after visiting several bunkers and topping his tee shot at the final hole in an erratic 71.

Briton Tommy Fleetwood completed a sparkling 66 to get to nine-under, level with compatriot Matt Fitzpatrick, the U.S. Open champion, and Australian Adam Scott.

American Jordan Spieth, the 2017 Open champion, and his compatriot Patrick Cantlay were on eight-under.

Shane Lowry made back-to-back eagle twos to storm up the leaderboard but Ireland's 2019 Open champion faded to finish on seven-under alongside American Kevin Kisner, who made nine birdies in his 65, Briton Tyrrell Hatton, Belgian Thomas Pieters and American Brian Harman.