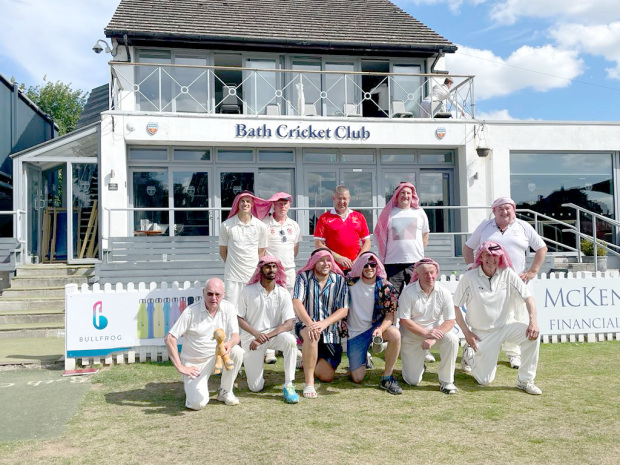 The Awali Camels at the Bath Cricket Club ground

Bahrain’s most famous international touring cricket team have an illustrious record of fine victories over English, Welsh and Irish clubs in 27 unbroken years of tours to the British Isles. Now Bath CC, reputedly England’s current top league club unbeaten in the league so far, is added to the list. The victory means the Camels are unbeaten so far on tour with a record of five from five.

Bath fielded a strong team of first-teamers and development squad players. Their captain was Awali Camels’ own George Axtell, himself a member of Bath’s pace attack and with a knock of 94 under his belt earlier in the tour against Oldbury CC. Perhaps a Camel in sheep’s clothing?

So much was expected of Axtell as he opened the batting, facing the Camels’ rising star Haniel.

With top fielder Mumtaz temporarily off the field, Bath’s South African star ‘Brad’ stood in at slip. The catch he took off Haniel’s third ball, a one-handed scorcher worthy of any Test match, saw Axtell traipsing, bemused, back to the historic club house, followed soon by Toby, also snapped up at slip by Brad off an inspired Tom Wooding.

Now there were stirrings in the crowd. Could there be an upset? Could Bath lose their unbeaten run?

Their fears were calmed with the advent of ‘Aussie Alain’ (51), Bath’s Australian star batsman and partner, ‘Solid’ Alex (22) who now set about the Camels’ change attack with gusto and not a little luck. 76 runs came from the next nine overs. The reintroduction of Wooding saw off Alex, while two miserly overs from Steve Turner and three wickets, almost in successive balls, by skipper Matt Rees slowed things down again.

Fiery Freddie briefly threatened till Wooding claimed his third wicket courtesy of a steepling catch by Graham Hoar. Dave Hilton lured ‘Mad’ Max into a lofted drive that saw Fergus Shaw diving full-length forward to scrape his hands under the ball. A real case of a Camel giving blood for the team!

With some Bath members in the crowd mumbling about ‘cancelling their subscription’, an injection of quick runs was required. But was it too late? The score was just 129 with one over remaining. Up stepped Hankins, a name synonymous with cricketing excellence – at least on one side of the family - who threw caution to the wind and smashed 20 off the final over.

Now, the target was 150 to win. Against Bath’s much vaunted attack, could the match-hardened Camels batsmen rise to the challenge?

Enter Charles Forward, not easily missed physically but barely noticed until now in his position in front of the stumps, to set the Camels on their victory path. As if inspired by Graham Hoar’s immediate belligerence – smacking successive fours off his first two deliveries – Forward launched a fierce leg-side barrage of fours and sixes, delighting and scattering the flocks of international tourists drawn to this picturesque cricket ground slap-bang in the centre of Bath.

Forward’s half-century, together with aggressive contributions from Rees (19) and Wooding (22), rocketed the score to 120 off 13 overs. With just 30 required off 42 balls, some mature, steady batting was all that was needed. This was amply provided by Haniel (26*) and Hilton (13*).

Although the match went to the last over with just one run required for victory, any Camels’ nerves were settled when ‘Hilts’ Hilton lifted the second ball over gully for four. The celebrations went on loud and long – deservedly so. This Camels tour has already achieved epic status.

Roll on the final fixture! The Camels face a tough, uncompromising outfit at Easton-in-Gordano, looking to knock them off their high horse.