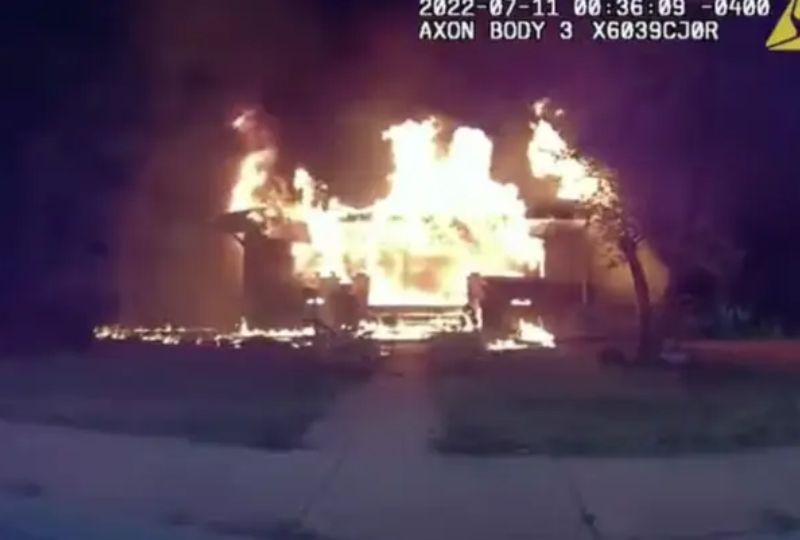 Screen grab from the body-cam footage.

A 25-year-old pizza delivery driver from Lafayette, Indiana, has been hailed a hero in every sense of the word after he ran inside a burning house and saved five children.

Nicholas Bostic was cruising the streets of Lafayette one night when he noticed that a house was on fire.

He immediately ran inside and helped save the lives of five children, four of whom were siblings having a sleepover with a friend.

Mr Bostic had forgotten his phone and was therefore unable to call 911. Regardless, he made his way to the back of the house, entered the property and ushered four of the children outside to safety.

Once they were outside, he was informed that a six-year-old girl was still inside the house and in spite of the thick smoke and high temperatures, Mr Bostic managed to locate the girl and punched through a window to get them both to safety.

He was treated in hospital for a serious cut to his arm and severe smoke inhalation, but has since been discharged, according to Indiana police.

“I’m glad I was there at the right time, the right place. If [the] opportunity came again and I had to do it, I would do it. I knew what I was risking. I knew the next second it could be my life. But every second counted,” Bostic said.

Lafayette Police Lt Randy Sherer confirmed the blaze broke out at around 12:30am on July 11 and hailed Mr Bostic's actions as ‘heroic’.

Here’s the video to go along with the story. pic.twitter.com/TvZ5wzCg1f