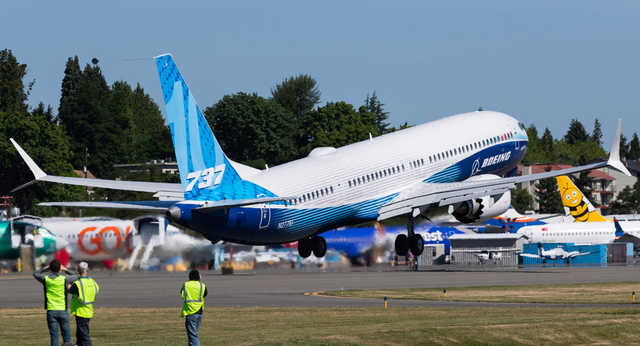 FARNBOROUGH, England: Record temperatures at the Farnborough Airshow this week have ratcheted up pressure on global aviation to shrink airplane emissions and turn a raft of potential solutions – many of which are yet to be proven – into reality.

The airline industry, responsible for nearly three per cent of global carbon dioxide emissions, faces formidable challenges to meet ambitious goals to cut emissions. Global airlines and aerospace manufacturers have vowed to be net zero by 2050.

The boss of planemaker Airbus said the heatwave was a strong reminder of the need for urgency.

“I consider there is urgency, speed is of the essence in the transition,” Guillaume Faury said. “And in an industry that is hard to abate ... we need to be moving fast.”

The US and Europe are trying to boost production of sustainable aviation fuel, or SAF, which is now made in miniscule quantities from feedstocks like used cooking oil, and can be two to five times more expensive than standard jet fuel.

In the US, Congress has to date failed to approve tax credits that would make SAF cost competitive.

“There’s only so much used cooking oil you can synthesise,” said the engine maker’s chief executive Grazia Vittadini.

The problem is there is not much “green” hydrogen – produced using renewable energy – around to combine with captured carbon to make it, she said.

Other short-term options include boosting the efficiency of engines, speeding up the replacement of older less efficient aircraft and improving the routing of airplanes to cut emissions.

Companies are working on longer-term solutions like electric or hydrogen-powered airplanes, but critics say those are still a long way from reality.

Airbus and more than a half dozen airlines said at the show they had signed letters of intent to potentially buy carbon removal credits to offset the emissions from air travel from a planned direct air carbon capture and storage facility in Texas.

Boeing Commercial Airplanes CEO Stan Deal said it was important new requirements were “underpinned by real technology that can meet the standards.”

The prior ICAO standards were criticised by many environmentalists for doing little to cut emissions.

While pros and cons of competing technologies were debated, the need for progress appeared settled.

“You only have to walk around the air show here to see that sustainability is at the front of everyone’s mind. And if you compare what you see today to what you saw three years ago, it’s a massive shift.”