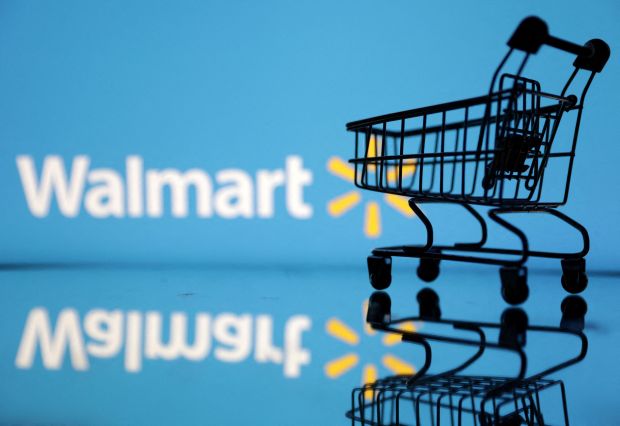 Shopping trolley is seen in front of Walmart logo in this illustration, July 24, 2022. Reuters Illustration

NEW YORK:  Top US retailer Walmart Inc on Monday slashed its profit forecast as surging prices for food and fuel prompted customers to cut back on discretionary purchases, and its shares slid 10% in trading after the bell.

Walmart, a bellwether for the retail sector that caters to cost-conscious shoppers, said its full-year profit would decline 11% to 13%, compared to the 1% fall it previously forecast. It pledged to cut prices of clothing and general merchandise more aggressively than it did in May to reduce a spring backlog.

Excluding divestitures, full-year earnings per share are expected to drop 10% to 12%, the company said.

Neil Saunders, managing director of retail at GlobalData, called the warning a "cause for concern" for Walmart that highlighted the pressure on all retailers.

With prices for gasoline and food spiking, consumers are no longer clamoring for apparel, home goods, appliances and kitchenware, saddling retailers with mountains of inventory.

Inventories at general merchandise stores at the end of April were the highest since at least 2000, U.S. Census Bureau data showed.

Supply-chain snafus and miscalculations around demand have added to problems. In May, Walmart said it was sitting on over $60 billion of inventory at the end of the first quarter and promised "aggressive" price cuts on items such as apparel.

On Monday, the company said it needed more price cuts to pare inventories.

In late May and June, Walmart's smaller rival Target trimmed its profit forecast twice in several weeks, announcing it was struggling with $15 billion in inventories and saying it would resort to "necessary" actions including cutting prices and canceling orders.

Both Walmart and Target are squeezing some suppliers to absorb higher costs.

"The increasing levels of food and fuel inflation are affecting how customers spend. ... We're now anticipating more pressure on general merchandise in the back half," Doug McMillon, Walmart's chief executive, said in the statement on Monday.

Evidence of a consumer spending pullback is growing, and an update later this week on US economic growth may show output shrank in the April to June period for the second quarter in a row.

The US Federal Reserve, intent on curbing the fastest inflation in 40 years, is raising interest rates in part to curb spending across the economy.

Walmart on Monday said it now estimates adjusted earnings per share for the second quarter to decline around 8% to 9%, compared its previous outlook of flat to slightly up.

Walmart, however, raised its forecast for growth in U.S. comparable sales, excluding fuel, to 6%, mainly to account for the rise in food prices. It previously forecast growth of 4% to 5%.