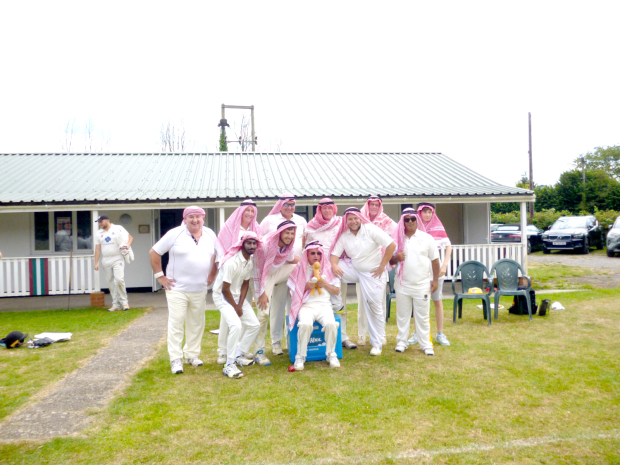 For the fourth time in a row, a game went down to the wire. For the fourth time in four matches, the game was decided tantalizingly in the last over. This was touring cricket, indeed any kind of cricket, at its finest. It could even be said it was the Awali Camels’ finest hour. It has been over two decades since the Camels last claimed a clean sweep, far too long ago for the memories of all but a couple of the present herd.

Easton in Gordano CC (EiG) have a long history of toppling giants, and they were not going to let the Camels’ impressive unbeaten record cower them into meek submission. This attitude was clearly evident in openers Moss and Tomlinson, who unfussily amassed 55 runs in 10 overs, providing a solid base for the big hitters to come. Both fell LBW to Steve Turner and Guy Parker, bowling together as they did in 1995 in the Camels first ever tour.

As was feared, the middle order of Coleman and Lawrence entered the fray determined to up the run rate, which they managed with cultured and agricultural shots to all corners of the EiG ground. Fergus Shaw covered miles in the Belgium-sized outfield, skinning elbows and knees on the bone-hard ground to save fours and keep the batters running.

Groups of spectators were kept busy hunting for the many balls that disappeared into the overgrowth of undergrowth lining the ground on three sides. The doughty pair took the score from 87 off 20 overs to a challenging 177. Lawrence eventually fell, bowled by Matt Rees for 60, with just one ball of the innings left.

Now the Camels had a real task on their hands. In the absence of star batters Graham Hoar and Dave Hilton, the Camels couldn’t afford to throw away their wickets.

Shock horror! In the very second over, Haniel, usually so solid, feathered a catch to ‘keeper Lawrence off the canny bowling of Anderson. The tall right-arm bowler conceded just 13 runs off his 4 overs, only three of them off the bat!

A partnership was required now. In 1999, Mumtaz and Guy Parker had amassed a century-partnership at Pocklington in Yorkshire. Now they were together again, this time, adding 91 runs together. They scored their runs in their own different ways, Parker with well-worked singles and the occasional reverse sweep, Mumtaz with his flamboyant drives and cuts to the boundary.

When Parker departed for 37 bowled by Welsh – attempting yet another reverse hit – Mumtaz went on to score a match-winning 79 before being run out by a superb throw from the boundary.

But, with his departure, there were still runs needed. Indeed, when Matt Rees shoveled Welsh straight down Coleman’s throat, and Fergus Shaw’s promising cameo was tragically cut short by the umpire’s raised finger, the Camels still had a job to do.

Enter skipper, Charles Forward. Facing the first ball of the last over with just two needed, he calmly patted the first ball back to the bowler. The fielders closed in, sensing an unlikely scenario – a maiden over and victory. But no! The very next ball fizzed off the burly left-hander’s bat back and screamed to the mid-off fence. A fitting end to an unforgettable tour.