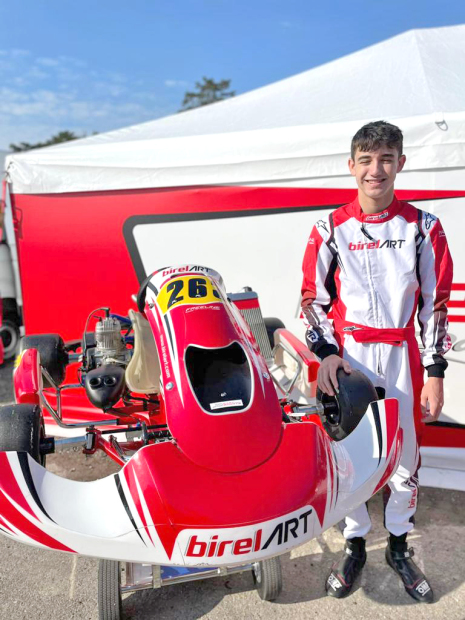 Lewis with his kart at Karting Genk track in Belgium

Lewis Smith put in a strong performance in his IAME Senior category races over the weekend, held as part of a competitive meeting at Karting Genk track in Belgium.

The up-and-coming Bahrain-based racer showed his resilience and fighting spirit, gaining several positions in all three of the weekend’s races, which saw many of the world’s leading young karters battle it out.

Lewis’s participation was highlighted by his outing in the third and final race, where he finished in ninth place overall after starting 14th on the grid.

The 16-year-old Briton quickly moved up three positions on the first of 14 laps before breaking into the top 10 by lap six. He continued to power ahead and even went as high as seventh, maintaining his place for five laps.

Lewis lost two places in the end to cross the chequered flag in ninth, but nonetheless put in a fantastic drive to secure his place in the final classification’s top 10.

The British School of Bahrain student finished 11.391 seconds behind winner Youri Bonte from the Netherlands, who won all three races.

“It was a very tough final race but I put in my maximum effort and I am pleased to have finished in the top 10,” said Lewis, who was suited up in his BirelART Bahrain team’s colours.

“I was determined to get as high a position as I could and represent Bahrain karting the best I can. Racing in events such as this is very exciting and I am glad that I am able to gain experience at such a high level.

“I look forward to getting back into the kart, especially in a few weeks’ time here at Karting Genk, and I hope to keep improving and growing.”

Earlier in the meeting in race two, Lewis was taken out after the start and dropped behind to 28th. But he gradually made his way up the order and brilliantly gained 12 places to finish 16th. Lewis was classified 17.302s behind Bonte on the final timesheet.

In race one, Lewis set the tone for his weekend of superb comebacks, falling behind to 21st but making up six places to 15th until the final lap when he finished in 18th place, 17.890s behind Bonte.

Lewis also had a fine showing in qualifying, clocking a fastest lap of 55.794s around the 1.360-kilometre circuit, which was just 0.705s off the leading pace.

The meeting was the first of three for Lewis this summer. He is scheduled to return to Karting Genk for the IAME Series Benelux 2022 from August 19 to 21, and then wrap up his programme in the IAME Euro Series 2022 from August 25 to 28.

Lewis is one of Bahrain’s top young karters who has been honing his skills in the kingdom. Those interested in backing him can email [email protected]