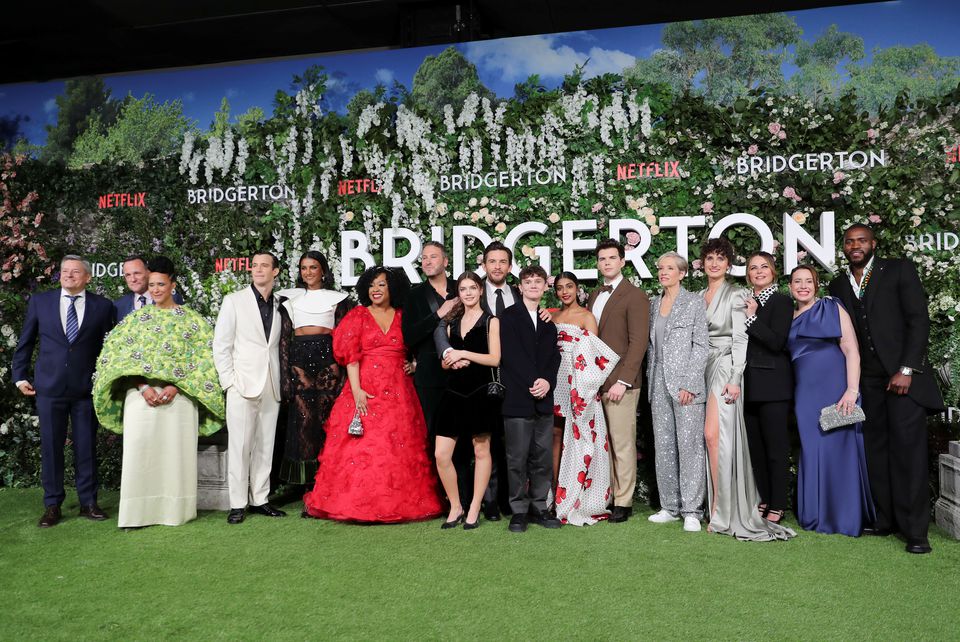 Cast and crew members attend the world premiere for the second season of the Netflix show "Bridgerton" in London, Britain (Reuters Photo)

Netflix Inc on Friday sued the creators of an alleged unauthorised musical stage production of its popular period drama "Bridgerton," accusing them of copyright infringement after building demand for their knockoff on TikTok.

The complaint was filed against Abigail Barlow and Emily Bear in the federal court in Washington, DC, three days after a sold-out performance of "The Unofficial Bridgerton Musical" in that city's Kennedy centre.

A lawyer for the defendants had no immediate comment, having yet to review the complaint.

"Bridgerton," based on Julia Quinn's bestselling romance novels, attracted 82 million viewers in the first four weeks of the series' debut on Netflix, a record at the time. It was renewed for a second season, and inspired a spin-off series and live event, "The Queen's Ball," hosted in six cities.

Netflix said after "Bridgerton" was first released in December 2020, the defendants started posting about the series to TikTok, where they have 2.4 million followers, including creating songs based on characters, scenes, dialogue and plot points.

The company said it warned the defendants repeatedly to stop, but they ploughed ahead with an album titled "The Unofficial Bridgerton Musical," which won a Grammy award, and their stage show.

This week, Barlow and Bear's musical was performed in front of a sold-out crowd at the Kennedy centre in Washington, where Netflix was hosting its own live Bridgerton experience.

The Kennedy centre show "attracted Bridgerton fans who would have otherwise attended the Bridgerton Experience and created confusion as to whether Netflix had approved of Barlow & Bear’s unauthorised derivative works," Netflix said in the lawsuit.

A September performance is planned for Royal Albert Hall in London, the suit claims.

The lawsuit seeks to stop the alleged infringements, plus unspecified damages.