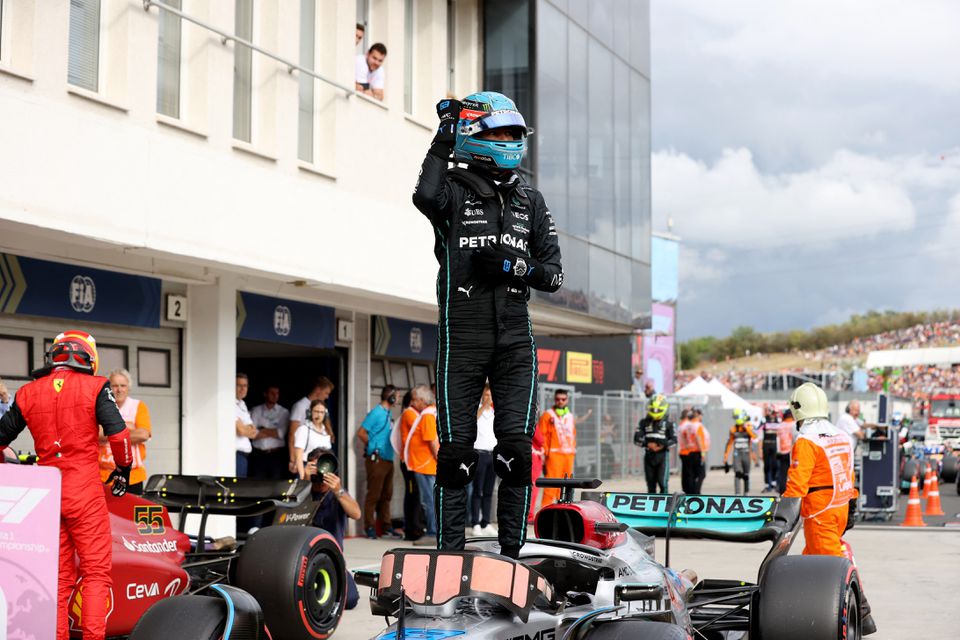 BUDAPEST: Britain’s George Russell seized the first pole position of his Formula One career with a stunning qualifying lap in Hungary yesterday as Mercedes found their missing speed and swept fancied Ferrari aside.

Russell, hailed as ‘Mr Saturday’ for his qualifying performances while with lowly Williams, lived up to his reputation against all odds.

Carlos Sainz had taken provisional pole for the Italian team and Charles Leclerc then went second fastest with his last flying lap before Russell forced a rethink to secure the reigning champions’ first pole of the season.

“Yesterday was probably our worst Friday of the season,” said Russell, who declared himself “absolutely buzzing” on a special day for the 24-year-old and his team.

“Everybody last night was working so hard, we didn’t really know what direction to go in.

“Then that last lap, I got round turn one, mega turn one... turn two was mega and the lap time just kept on coming. I came across the line, looked at the screen and saw we went P1 and that was an incredible feeling.”

Russell had been second fastest after the first flying laps, but nearly half a second slower than Sainz, who conceded he had not expected to be beaten by the Briton.

Asked if Mercedes were back, Russell laughed: “I don’t know. We need to look into it and understand where that came from today. There’s a few ideas we have.”

Seven-times world champion Lewis Hamilton, winner a record eight times in Hungary, will start down in seventh and said he had suffered a problem with his Mercedes’s drag reduction system.

Verstappen, 63 points clear of Leclerc at the top, locked up and ran wide on his first flying lap that left him languishing in seventh.

He then complained over the radio of a lack of power when he went out for his final attempt. The champion tried in vain to reset the car, telling the team that nothing was working.

Mexican teammate Sergio Perez failed to make the top 10 shootout, qualifying 11th at a track where overtaking is always tricky.