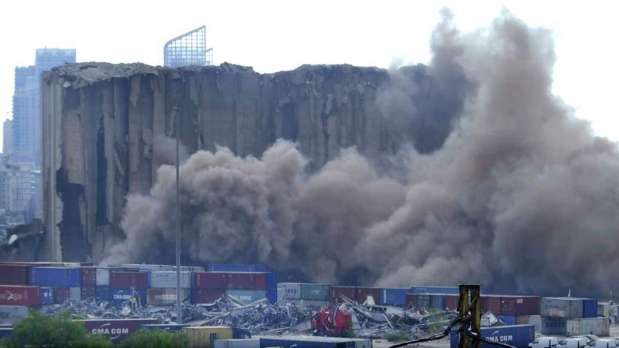 BEIRUT: Part of the grain silos at Beirut Port collapsed yesterday just days before the second anniversary of the massive explosion that damaged them, sending a cloud of dust over the capital and reviving traumatic memories of the blast that killed more than 215 people.

There were no immediate reports of injuries.

Lebanese officials warned last week that part of the silos – a towering reminder of the catastrophic August 4, 2020 explosion – could collapse after the northern portion began tilting at an accelerated rate.

“It was the same feeling as when the blast happened, we remembered the explosion,” said Tarek Hussein, a resident of nearby Karantina area, who was out buying groceries with his son when the collapse happened. “A few big pieces fell and my son got scared when he saw it,” he said.

A fire had been smoldering in the silos for several weeks which officials said was the result of summer heat igniting fermenting grains that have been left rotting inside since the explosion.

The 2020 blast was caused by ammonium nitrate unsafely stored at the port since 2013.

One of the most powerful non-nuclear blasts on record, the explosion wounded some 6,000 people and shattered swathes of Beirut, leaving tens of thousands of people homeless.

Ali Hamie, the minister of transport and public works in the caretaker government, said he feared more parts of the silos could collapse imminently.

Environment Minister Nasser Yassin said that while the authorities did not know if other parts of the silos would fall, the southern part was more stable.

The fire at the silos, glowing orange at night inside a port that still resembles a disaster zone, had put many Beirut residents on edge for weeks.

There has been controversy over what do to with the damaged silos.

The government took a decision in April to destroy them, angering victims’ families who wanted them left to preserve the memory of the blast. Parliament last week failed to adopt a law that would have protected them from demolition.