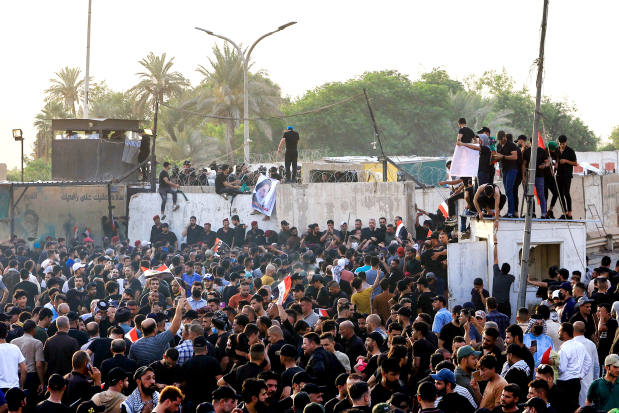 Supporters of the Coordination Framework gather during a protest near Green Zone in Baghdad, Iraq, yesterday

BAGHDAD: Thousands of Iraqis took to the streets of Baghdad yesterday in counter-protests as rival supporters of Shi’ite cleric Moqtada Al Sadr extended their occupation of parliament into a third day.

Almost 10 months after Iraqis went to the polls, a political standoff pits two key factions of the Shi’ite political scene, between the populist Sadr with a devoted following of millions, and the powerful pro-Iran Coordination Framework.

“The people will not allow a coup,” read placards held by supporters of the Coordination Framework as they gathered on a main street leading to the Green Zone, the home of parliament, which Sadr’s supporters have been occupying since Saturday.

Police fired water cannon at crowds in a bid to prevent them from crossing a bridge leading to the Green Zone, inside which thousands of Sadr supporters maintained their protests, waving flags and carrying placards of their leader.

Sadr’s supporters on Saturday breached the normally high-security Green Zone – also home to government buildings and embassies – in protest against a prime ministerial nomination by the Coordination Framework.

Followers of the Coordination Framework urged supporters not to enter the Green Zone, saying their objective was to “defend the state and its legitimacy.”

Sources close to the Supreme Coordinating Committee of the Framework Demonstrations told our sister paper Akhbar Al Khaleej that contacts took place between some of framework leaders and Al Sistani’s son, who conveyed the view of his father, the supreme Shi’ite authority, that the authority should not interfere in the conflict between the Framework and the Sadrist movement.

The source indicated that Mohammed Reda Al Sistani assured the Framework leaders that the reference doors will remain closed to everyone and that Al Sistani will not involve himself into a political struggle that may end in bloodshed.

According to the sources, the Framework forces intended to besiege Prime Minister Mustafa Al Kadhimi, remove him by force and appoint the Framework candidate, Mohammed Shia Al Sudani, in his place.

Iranian foreign ministry spokesman Nasser Kanani said Tehran respects “the choice of the Iraqi people,” and that “dialogue is the best way to solve the internal problems of Iraq.”

Sadr’s 73 legislators had made up the biggest group of parliament’s 329 members, but they were unable to cobble together a government.

In June they quit, a move that made their pro-Iran rivals the largest bloc in the legislature.

But the Sadrist camp was outraged by the Coordination Framework’s recent nomination of former minister Mohammed Shia Al Sudani for premier, prompting them to occupy parliament.

On Sunday, Sadr called on “everyone... to support the reformist revolutionaries.”

The Coordination Framework described the appeal as “a call for a coup against the people, the state and its institutions.”

Followers of Sadr also held rallies in the southern cities of Basra, Kut and Nassiriya yesterday.

“Here are the soldiers of the sons of the sayyed,” Sadr’s supporters shouted in parliament’s entrance hall.

“We want to get rid of the government of the corrupt,” said protester Zaher Al Atabi. “From 2003 until now, those who have run the country have done nothing to develop public services, no health system, no education.”

But while the cleric’s supporters see him as cracking down on graft, Sadrist supporters hold posts at the highest levels of government ministries – and opponents accuse them of being just as corrupt as Iraq’s other political forces.