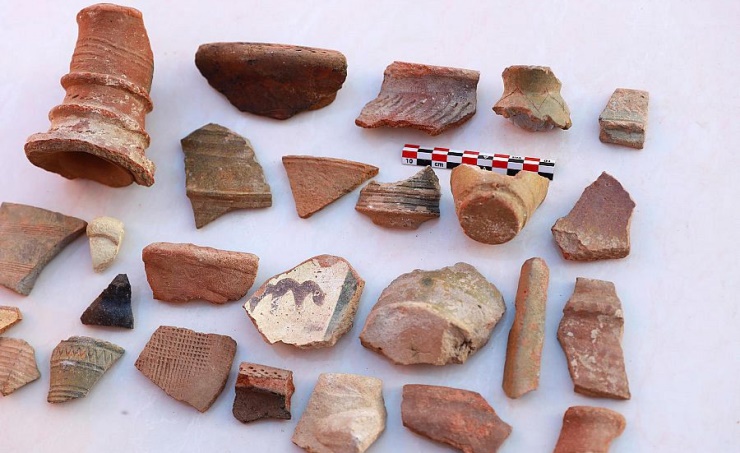 Riyadh: Heritage Commission today announced new discoveries at archaeological sites at Farasan Islands located around 40 kilometers away from Jazan City, following excavation works by a joint Saudi-French team in cooperation with the University of Paris 1, which resulted in discovering several architectural phenomena and archaeological pieces dating back to the 2nd and 3rd centuries AD.

According to the Saudi Press Agency (SPA), the discoveries are part of the commission’s scientific efforts in the field of survey and excavations of heritage sites in the Kingdom of Saudi Arabia and preserving them as a cultural and economic resource.

The works of the scientific team unveiled rare pieces, including a Roman folded armor made of copper ingots, and another kind of armors known as “Lorica squamata”, which is the most frequently used during the Roman era between the 1st and 3rd centuries AD, and this kind represents the rarest piece that the team managed to find, in addition to discovering an inscription of garnet for “Genos”, a famous Roman figure in the history of the eastern Roman empire, as well as finding a head of a small stone statue.

A Saudi-French team had paid reconnaissance and exploratory trips to the Farasan Island in 2005 and identified locations with archaeological indicators, before surveys start on the island in 2011, where previous explorations conducted between 2011 and 2020 led to several architectural and archaeological discoveries that showed that these sites date back to almost 1400 BC.

These works at Farasan Island locations contributed to reaching several archaeological discoveries and unveiled significant sites and provided important insights on the civil role of the historical ports in the southern part of the Kingdom of Saudi Arabia and their role in controlling the trade in the Red Sea area and the old marine trade routes.

These archaeological discoveries highlight the civil depth of Farasan Islands and the importance of the Kingdom of Saudi Arabia and its strategic location as being a hub for various civilizations, where the Heritage Commission continues its intensified efforts to administrate the components of the cultural heritage and protect and maintain cultural sites, in addition to benefiting from them in the sustainable development process through working under accurate strategies and wide partnerships at the local and international levels.