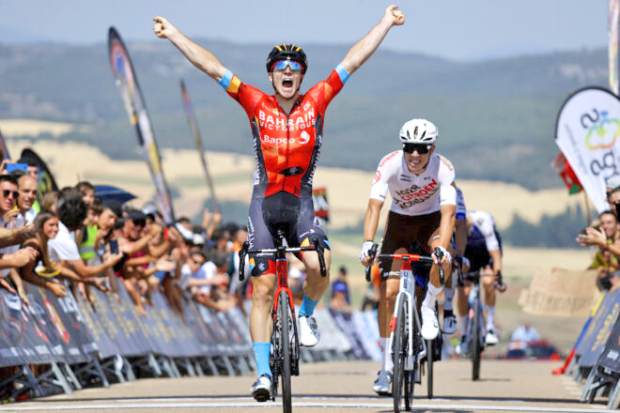 In only his second professional race since joining Bahrain Victorious, Matevz Govekar showed his prowess in an uphill sprint to the line at Ciudad Romana de Clunia.

The 169km fourth stage starting in Torresandino saw an early break form of 14 riders, including Govekar. With a three-minute gap to the peloton, the break began to attack each other, which saw the group dwindle to seven riders. With no threat to the GC, the peloton sat up, giving the men in the breakaway the confidence that it would be their day.

With the uphill finish, attacks started to go in the final 3km, but with no one getting away, it came down to a sprint where Govekar proved the fastest beating Valentin Retailleau (AG2R Citroën Team) to the finish.

Govekar said, “Today was the plan in the team that if there was a big break, I try and join in the big break with 14 riders. In the final, I followed the attacks. When I saw the break might come to the finish line, I started to work a little bit, and in the end, it was really perfect.

“I think everyone was pretty much on the limit, so I knew that there was quite a difficult finish, but I stayed in the front, and I know I have a really strong sprint, and in the last 300m, I started to go full gas. It was amazing that I could win.”

Meanwhile, in Poland, the 79th Tour de Pologne finished in Krakow with yet another podium for Bahrain Victorious.

On a baking hot day ridden full gas from the start, Phil Bauhaus made it three podiums for the week, and six out of seven for the team as he placed 3rd in the final stage.

The team rode on the front all day under a scorching sun, and protected leader Pello Bilbao’s 3rd place in the General Classification, to round off an exceptional performance in the last World Tour race before the Vuelta a España gets underway in Holland in two weeks’ time.