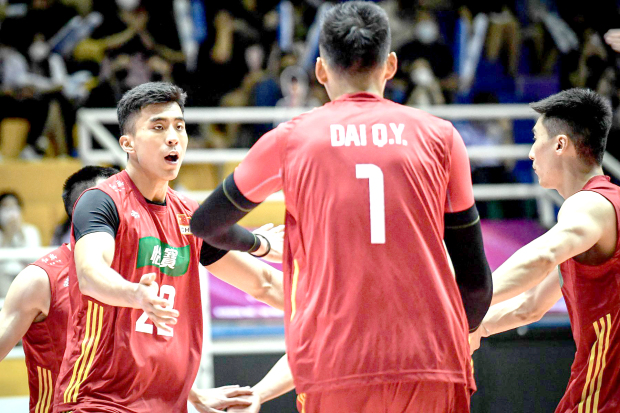 China players react during the game against Bahrain

Tournament favourites China staged a remarkable recovery from one set down to defeat a battling Bahrain team 3-1 yesterday in the last Pool D game of the 2022 AVC Cup for Men in Nakhon Pathom, Thailand.

Bahrain, on tournament debut, had entered the match on a high after defeating highly-rated Chinese Taipei, 3-0, in straight sets in their first ever AVC Cup appearance on Sunday and looked like they had carried their form over into this game as they won the first set 27-25, raising their hopes of a second consecutive upset triumph.

But China, who also defeated Chinese Taipei, 3-1, on Monday, regrouped immediately and took the second set, 25-19, to level the game at one set each.

China raced into the lead early in the third set and, although Bahrain tried hard to catch up, the Chinese had found their momentum and eventually won the set, 25-19, to make it 2-1.

Bahrain were determined not to be pushovers, however, and, needing to win the fourth set to stay in the match, kept pace with their opponents, equalizing every time the Chinese managed to get a point or two ahead.

Both teams had already qualified for the next round, courtesy of their respective victories over Chinese Taipei, the third team in the group who were relegated to a ninth-place play-off.

Having placed second in Pool D, Bahrain will now face Iran, the Pool B leaders and the number one ranked team in Asia, tomorrow at 5am, Bahrain time.

China will face Pakistan, who placed second in Pool B, later in the day.