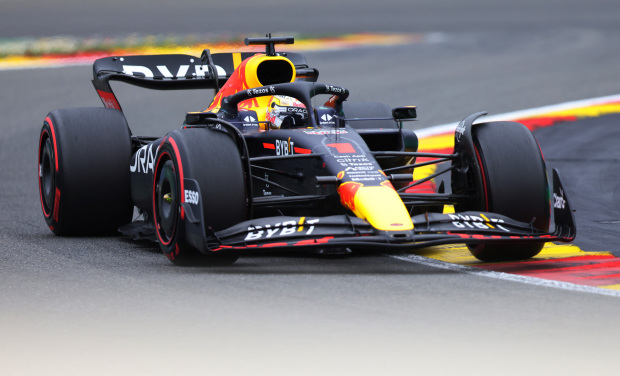 Verstappen in action during qualifying

SPA-FRANCORCHAMPS: Formula One championship leader Max Verstappen lapped in a league of his own in Belgian Grand Prix qualifying yesterday but Ferrari’s Carlos Sainz took pole position after penalties reshuffled the grid.

The Dutchman set a time of one minute 43.665 seconds around the 7km track to end up 0.632 seconds quicker than Spaniard Sainz.

The Red Bull driver will start 15th on today’s grid, however, after being hit with engine and gearbox-related penalties.

“With the pace that we have in the car ... I want to be at least on the podium,” said Verstappen, who leads Leclerc by 80 points with nine races remaining.

The 24-year-old Dutchman won the previous race in Hungary from 10th on the grid and rivals said another Verstappen victory was entirely possible.

“And then Charles will probably come through as well.”

Verstappen won at Spa last year – a three-lap, rain-hit, safety car procession – and goes into today’s race gunning for a proper win in the country of his birth.

Sainz, on pole for the second time in his career, will be aiming for a second win but was also wary of Verstappen’s speed and the threat of Red Bull’s Sergio Perez who starts alongside on the front row.

“Happy to be starting on pole, not so happy with the gap to Max and Red Bull,” said Sainz. “Still a bit puzzled to see this big gap, it makes me wonder what’s going to happen in the race.”

Fernando Alonso will line up third for Alpine after setting the sixth-fastest time.

The double world champion said he was aiming for a top-five finish.

His team mate Esteban Ocon was fifth in qualifying but dropped to 17th.

Lewis Hamilton will start fourth, after qualifying seventh, with team mate Russell moving up to fifth on a deeply disappointing day for the once dominant champions.

“To be 1.8 seconds behind (Verstappen), it’s a real kick in the teeth,” said Hamilton, who described his car as driving like it was towing a parachute behind it on the straights.

Mercedes had been widely tipped as contenders for victory, after closing the gap to the front in recent races and taking pole with Russell in Hungary.

Alexander Albon was one of the standouts of the final shootout, the British-born Thai racer ninth fastest to take sixth on the reshuffled grid for a Williams team bottom of the standings.

“We’ve got a car that, on paper, should be hard to overtake as we are quick on the straights, but it’s also not a track like Monaco where it’s easy to keep people behind, so it’ll be elbows out tomorrow,” said Albon.

The start of the session was delayed by 25 minutes so repairs could be carried out on a barrier damaged by a crash in a support event.

Ferrari were again in the spotlight for a strategic blunder when they sent Leclerc out on new tyres instead of the planned used set.

“Wait! What are these tyres?” exclaimed Leclerc, who was sent out on new soft tyres instead of used ones, as he started the final phase of the hour-long session.