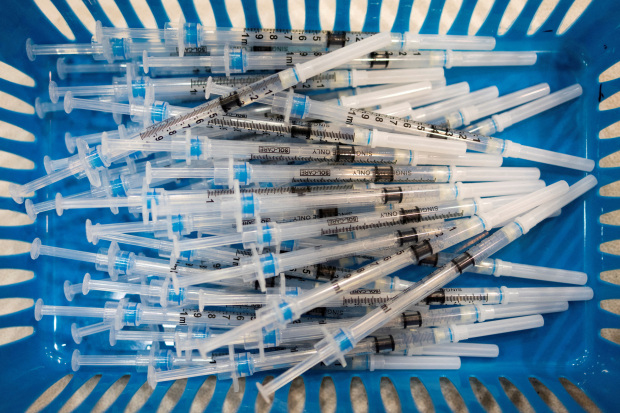 FILE IMAGE: Doses of the Pfizer-BioNTech vaccine against the coronavirus disease (COVID-19) are pictured at a booster clinic for 12 to 17-year-olds in Lansdale, Pennsylvania, U.S., January 9, 2022. Reuters Photo

The US Food and Drug Administration on Wednesday authorised updated Covid-19 booster shots from Pfizer /BioNTech and Moderna that target the dominant BA.4 and BA.5 Omicron subvariants, as the government prepares for a broad fall vaccination campaign that could begin within days.

The new vaccines also include the original version of the virus targeted by all the previous Covid shots.

The FDA authorised the shots for everyone ages 12 and older who has had a primary vaccination series and is at least two months out from a previous booster shot, shorter than prior recommended intervals.

Dr. Peter Marks, a senior FDA official overseeing vaccines, said he hopes the shots will restore the very good protection against symptomatic disease that the original vaccines offered when launched in late 2020 and early 2021.

"We don't know for a fact yet whether we will get to that same level, but that is the goal here," Marks said.

The government has begun working on the fall rollout, which could start soon after the U.S. Centers for Disease Control and Prevention's (CDC) outside expert panel meets on Thursday and agency Director Rochelle Walensky makes a final recommendation.

The United States has secured more than 170 million doses of the two shots in an attempt to stave off the worst effects of a potential surge in infections as schools reconvene and people spend more time indoors due to colder weather.

This could be the last Covid vaccine provided for free to all Americans as the government plans to shift them to the commercial insurance market next year.

Pfizer said it has some doses ready to ship immediately and can deliver up to 15 million doses by Sept 9. Moderna said it expects its new shot to be available "in the coming days."

Experts have said that the updated vaccines will be important for older people and the immunocompromised, but noted there is limited data to support the level of protection the government is hoping for.

"For people who haven't been infected whose last dose was a year ago, yes, it's going to benefit them. How much, I can't tell you," said Dr. Gregory Poland, a vaccine expert at the Mayo Clinic. He said the new shots are unlikely to help those who have been recently infected.

The revaccination campaign this fall is expected to target many more people than the previous boosters authorised by the FDA earlier this year. Concerns about long Covid was one reason younger and healthier Americans should get the shot, officials said.

"If anything is going to prevent transmission and long COVID, it's going to be a variant specific vaccine for the variant that's currently circulating," FDA Commissioner Robert Califf said.

DIFFERENT VACCINES IN OTHER COUNTRIES

About 50% of those in the United States over the age of 12 - some 107 million people - have received at least one Covid-19 booster dose so far.

Some scientists were critical of the recommendation that would allow for a new booster just two months after a prior shot, saying a longer gap would improve immune responses. FDA officials said the vast majority of Americans are significantly more than two months out from their most recent shot.

Other countries including Canada and the UK also have ordered updated Omicron vaccine boosters for fall campaigns, although some have purchased shots tailored to the BA.1 Omicron subvariant that caused the record surge in Covid cases last winter.

The FDA in June asked vaccine makers to tailor shots to the BA.4/BA.5 subvariants of the virus responsible for the most recent surge in infections worldwide. The BA.5 subvariant accounts for more than 88% of US infections.

The vaccine makers have not completed testing of the updated BA.4/BA.5-based boosters in humans. The FDA is basing its decision on safety and effectiveness data from the original shots as well as from clinical trials conducted on boosters using the BA.1 Omicron subvariant.