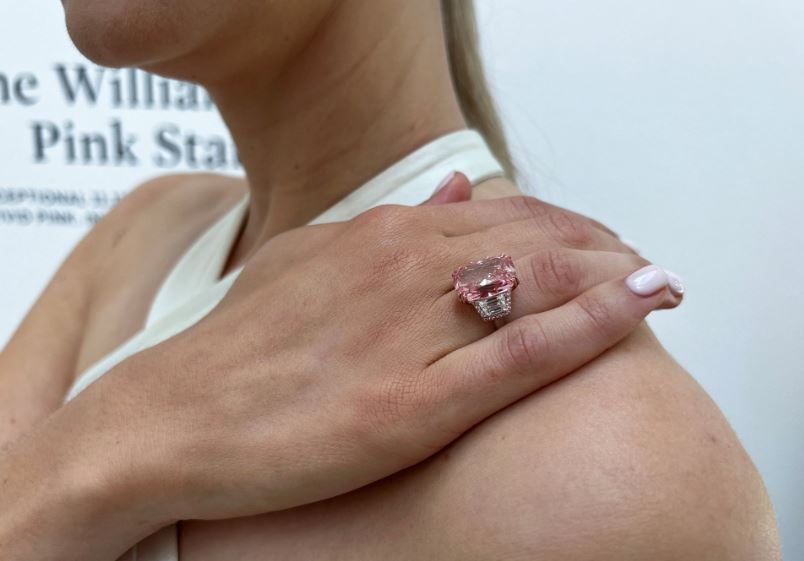 A model poses with a pink diamond due to put up for auction at Sotheby's auction house in London, Britain August 31, 2022. (Image credit: Reuters)

A dazzling pink diamond, described as one of the world’s purest, could fetch more than $21 million when it goes under the hammer in Hong Kong in October, auction house Sotheby’s said yesterday.

At 11.15 carats, the cushion-shaped gem is called ‘Williamson Pink Star’, in tribute to two other pink diamonds.

The other is the ‘Williamson’ stone – a 23.60 carat diamond given to Britain’s Queen Elizabeth as a wedding gift by Canadian geologist John Thorburn Williamson.

Worn by the monarch in a Cartier brooch, it was discovered in his mine in Tanzania.

The ‘Williamson Pink Star’ also originates from that mine.

“You then add in the extra factors like it being over 10 carats, internally flawless and Type IIA, and you get right down to the pinnacle,” he added referring to a subgroup of the most chemically-pure diamonds.

Top quality coloured stones are prized by the super wealthy and Spofforth said he expected many bids for the gem when it is offered for sale in a standalone auction on October 5.

Ahead of the auction, the diamond will go on tour to Dubai, Singapore and Taipei before arriving in Hong Kong.