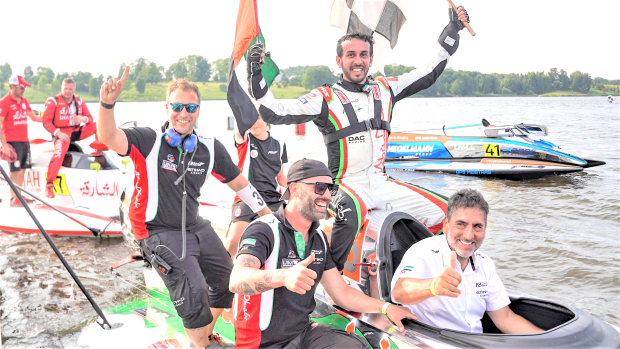 Team Abu Dhabi’s Mansoor Al Mansoori says he is ready to handle the pressure as he bids to secure the 2022 UIM F2 World Championship in a tense finale to the season over the next two weekends in Portugal.

His first F2 Grand Prix victory in Lithuania last month has given the Emirati driver a three-point championship lead over Germany’ Stefan Hagin to take into Sunday’s penultimate round in Ribadouro.

With the final Grand Prix of the campaign to follow a week later and 270km away in Vila Velha de Ródão, Al Mansoori is determined to follow team-mate and three-times world champion Rashed Al Qemzi to the F2 crown.

“I’m not surprised to be leading because, from the start of the season, I was aiming to put myself in a good position,” he said.

“Competing alongside Rashed has given me a lot of extra confidence, and this helped me to take the lead in the championship with my first win in Lithuania.”

Al Mansoori paid tribute to Italian powerboat racing legend, Guido Cappellini, who has delivered 14 world titles to the UAE capital since taking over as Team Abu Dhabi manager in February 2015.

“We all owe so much to Guido for the success the team has enjoyed since he took charge,” he said. “He has built a great team spirit, and used his experience to take us to the top.

“The most important thing I’ve learnt from him is to focus, and keep calm always. Before the last round, his advice about how to deal with the pressure from the boats behind was so important.”

“It wasn’t easy to hold my lead for 45 laps. But that was great experience, and now I want another strong finish on Sunday to take me into the last round.”

Back to back victories at the same two Portuguese venues 12 months ago secured a third F2 world championship for Al Qemzi, who could yet land an overall F2 podium place.

“I want to have a strong finish to the season,” he said. “There are still 40 points to be won, and I can still finish in a good position in the championship.”