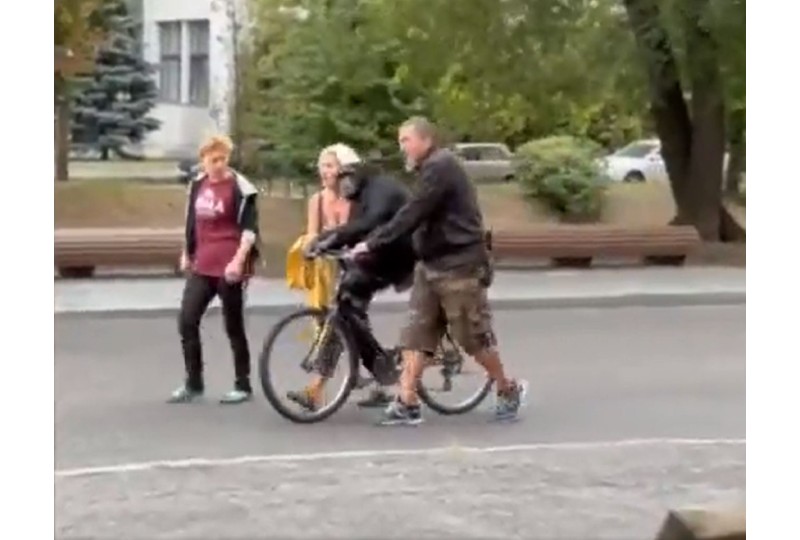 A screen grab from the video. (Video credit: TW/ HannaLiubakova)

The greatest escape of the year was sadly curtailed due to poor weather and the offer of a bicycle ride.

Chichi the chimpanzee was seen roaming the streets of Kharkiv after escaping from the Feldman Ecopark Zoo in Ukraine.

Citizens of Kharkiv witnessed Chichi roaming the city streets before being tracked down by zoo officials.

Onlookers stated that they were worried the zoo officials would have trouble capturing the wild animal, but it turns out that all Chichi needed was protection from the rain.

In videos captured by bystanders, a zoo official can be seen approaching Chichi and sitting down next to the chimp. The official then took off her bright yellow raincoat, and offered it to Chichi. Chichi immediately takes her up on her offer and proceeds to wear the raincoat.

#Ukraine In Kharkiv, a chimpanzee escaped from a zoo. It was walking around the city while zoo employees tried to convince it to return. Suddenly it started to rain, and the ape ran to a zoo employee for a jacket and then agreed to return to the zoo. pic.twitter.com/4AGiAHw1wf

The zoo official was then able to help Chichi to get on top of a bicycle and get the chimp back to its enclosure at the zoo.