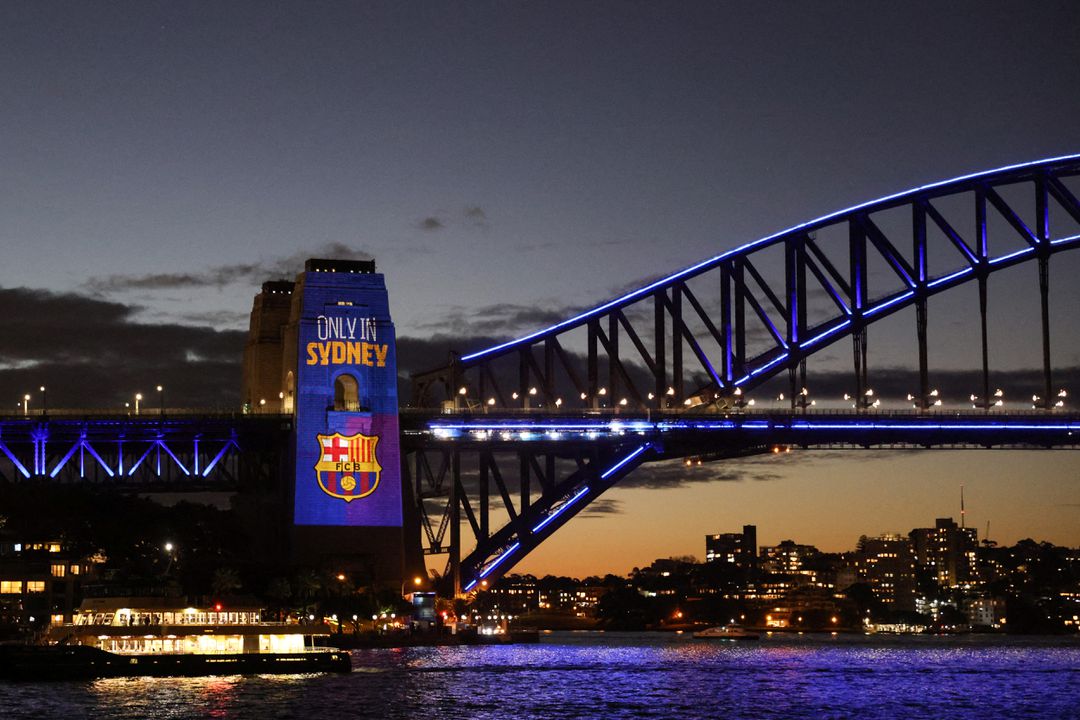 A projection of the FC Barcelona logo is seen on the Sydney Harbour Bridge as the squad visits Australia for a friendly soccer match against the A-League All-Stars, in Sydney, Australia (Reuters Photo)

LaLiga has raised Barcelona's spending limit by 800 million euros ($803 million), bringing it out of a spending deficit after the Catalan side sold off chunks of assets to patch up its finances, the Spanish league said.

Barcelona were given a cap of 96 million euros last year, which was slashed by January to minus 144 million euros - meaning the team had to find savings elsewhere to sign new players - after they ran up debts and future liabilities of 1.35 billion euros, with 673 million owed to banks. read more

As a result of their financial turnaround, the league said on Friday it has given Barcelona a cap of 656 million euros for the 2022-23 season.

To offset losses and comply with LaLiga's financial fair play rules, Barcelona sold 25% of their domestic television rights to U.S. investment firm Sixth Street for the next 25 years in two deals worth over 500 million euros. read more

The club raised an additional 200 million euros from the sale of a 49% stake in Barca Studios in two separate transactions, while also signing a long-term sponsorship deal with streaming giant Spotify in March. read more

LaLiga president Javier Tebas said Barcelona will have to continue to reduce their wage bill to maintain their spending limit for next season.

"Without the (sale of assets) it may not be so high next season. They may have to reduce their outgoings by around 200 million euros by selling players or even (selling more) assets," Tebas told reporters.

When asked if LaLiga had been too generous in accommodating the club's needs, Tebas said: "Not at all. The same rules are applied to all the clubs in Spain. To register Kounde, the president of Barcelona had to put up a personal guarantee.

"Is there a risk of bankruptcy? In my opinion, I don't think so, not at all. They have a high wage bill but a lot of equity, although... they have had and (will) have to reduce the wage bill."

Real Madrid have the highest spending cap in the league at 683 million euros, while Atletico Madrid are third behind Barcelona at 341 million euros.

LaLiga's spending limit accounts for the maximum amount clubs can spend on salaries, bonuses and amortisation payments on transfers across a season.