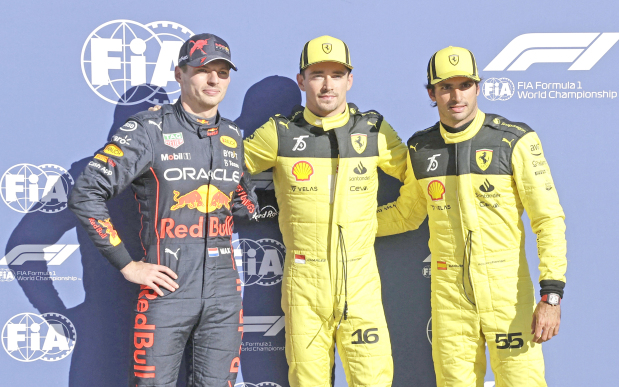 Nine of the 20-driver grid went into qualifying with grid drops hanging over them, in most cases for breaching their engine allowance for strategic reasons at a key moment in the season.

“It is a very good surprise today, considering where we come from,” said Leclerc, alluding to the Italian team’s struggles in qualifying at Spa-Francorchamps last month, as the army of Ferrari fans celebrated a home success.

“We were not expecting to fight for pole here... There’s a special motivation for this weekend and it’s great that we managed to do a good job today.”

The pole was the Monegasque’s eighth of the season, and first since France in July, and 17th of his career – as well as the 240th of the team’s history – and it came with Ferrari president John Elkann in attendance.

Leclerc put together a near-perfect lap on his second run in the final top 10 shoot-out, benefiting from an aerodynamic tow behind McLaren’s Lando Norris, to take pole with a best time of one minute 20.161 seconds.

The last time Leclerc, and Ferrari, started on pole at Monza was in 2019 and he won to stand on top of the podium at the ‘Temple of Speed’ as a flood of fans with flares and flags filled the pit straight.

Red Bull’s runaway championship leader Max Verstappen, 109 points clear of Leclerc with seven races remaining and chasing his fifth win in a row, was second fastest and one and a half tenths off the pace.

The Dutch driver will drop back for today’s start due to a five-place penalty.

There was some initial confusion about where he might start, with the Dutch driver expecting to drop to seventh.

“I think for tomorrow it can be quite strong and also knowing we have to start a bit back,” said Verstappen, who has won 10 of 15 races so far.

“All in all, it was a good lap and I enjoyed it. I think it will be an interesting day tomorrow.”

Russell was only sixth on the qualifying timesheets but will move ahead of all but Leclerc.

Lando Norris will line up in third place for McLaren after qualifying seventh, with Australian Daniel Ricciardo – last year’s winner in a team one-two – set to slot into fourth.

AlphaTauri’s Pierre Gasly, winner in 2020, is behind them with Alpine’s Fernando Alonso sixth.

Sainz, Hamilton and AlphaTauri’s Yuki Tsunoda all have back of the grid penalties and Mercedes said Hamilton would go to 19th.