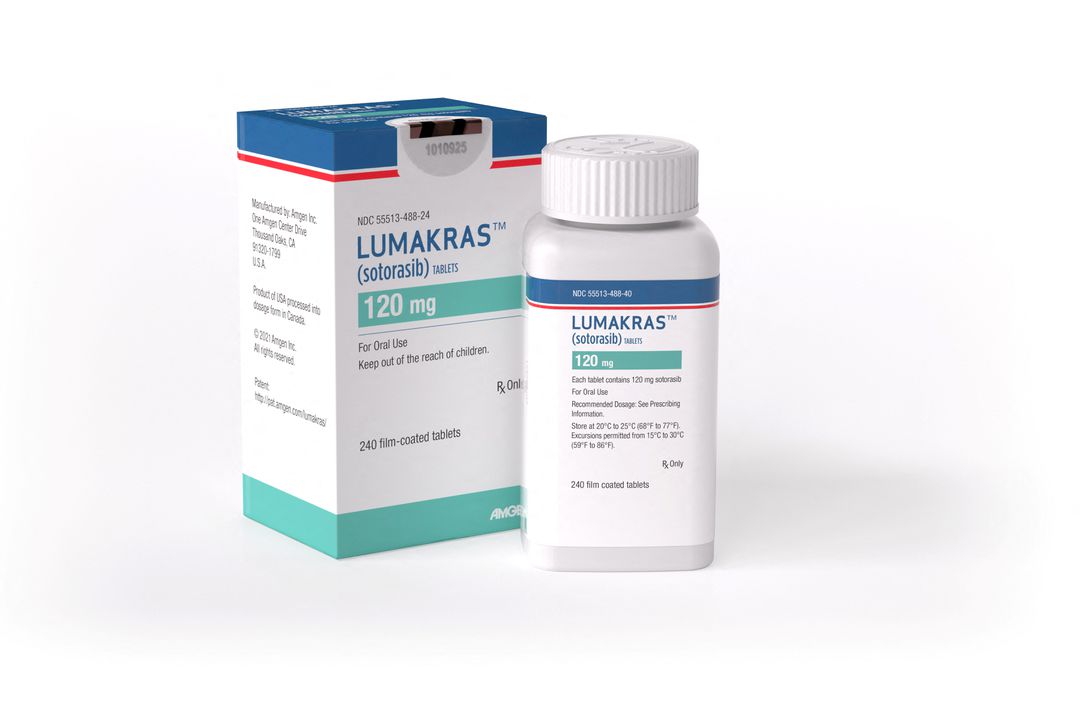 Amgen Inc. cancer drug, Lumakras, is displayed in its packaging at Thousand Oaks, in California, US (Reuters Photo)

Amgen Inc's Lumakras pill reduced the risk of disease progression in patients with advanced lung cancer by 34 % compared with chemotherapy in a clinical trial, the company said on Sunday.

There was no significant difference in overall survival between the two treatments in the confirmatory study required by U.S. regulators as a condition of accelerated approval for Lumakras. But Amgen said the trial was not designed to detect a survival difference.

The company is also testing whether the drug could be effective against lung cancer earlier in the disease, and said last month a small study of Lumakras combined with immunotherapy found high rates of liver toxicity and that further study was needed.

More detailed results from the 345-patient study, including median progression-free survival - the length of time until the cancer begins to worsen - will be presented on Monday at the annual meeting of the European Society for Medical Oncology (ESMO) in Paris.

Wall Street analysts, such as Michael Yee at Jefferies, have said investors expect a modest benefit of around two months for the Amgen drug over chemotherapy.

Amgen said 33 % of Lumakras trial patients experienced serious side effects such as diarrhea and elevated liver enzymes, compared with 40 % of chemotherapy patients.

The medication is designed to target a mutated form of a gene known as KRAS that occurs in about 13 % of non-small cell lung cancers, the most common form of the disease, and less frequently in some other solid tumours.

"We are offering the choice of a pill ... versus chemotherapy that means going to the hospital," Amgen oncology head Jean-Charles Soria told Reuters.

Lumakras was approved by the US Food and Drug Administration last year under an accelerated pathway for advanced lung cancer patients with KRAS mutations whose disease has worsened after treatment with chemotherapy or other medicines.

The agency also asked Amgen to study a lower dose of Lumakras, known chemically as sotorasib. The company said those results are expected in the fourth quarter of this year.

The FDA is slated to make an approval decision on a potential rival KRAS-targeting drug, Mirati Therapeutics Inc's (MRTX.O) adagrasib, by mid-December.

Mirati in May said adagrasib shrank tumours in 44 % of advanced lung cancer patients in clinical trials, but also caused serious side effects in 43 % of them.

At the ESMO meeting this week, Amgen is also presenting early data from a trial of Lumakras in combination with other cancer drugs for patients with colorectal cancer.