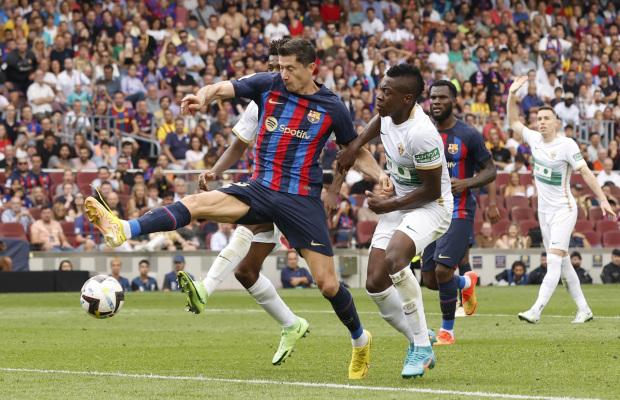 BARCELONA: Barcelona striker Robert Lewandowski continued his insatiable run of form in front of goal by scoring twice and Memphis Depay also got on the scoresheet as the Catalans cruised to a 3-0 win at home to struggling Elche in LaLiga yesterday.

The victory took Barca top of the standings on 16 points from six games although Real Madrid, on 15, can return to the summit if they win away at Atletico Madrid today.

Barcelona’s coach Xavi Hernandez rotated his squad for the visit of the league’s bottom side, making five changes to the team that lost 2-0 at Bayern Munich in the Champions League.

His side’s task was made easier when Elche centre-back Gonzalo Verdu was sent off in the 14th minute for pulling Lewandowski’s shirt as the striker was about to reach the area. From that moment on a fifth consecutive league win for Barca looked inevitable, and so it proved.

“We have a big squad, everyone is training well and prepared to play when the team needs them, and that’s the important thing,” said Xavi.

Lewandowski opened the scoring in the 34th minute, arriving deep in the area to knock in a cross from Alejandro Balde and score for the fifth consecutive game in LaLiga.

Memphis scored a magnificent goal to double Barcelona’s lead in the 41st minute, receiving the ball with his back to goal and a defender right behind him but swivelling at speed and blasting into the roof of the net.

Moments later the hosts thought they had scored a third when Pedri netted a pass from Lewandowski but the effort was ruled out for offside.

The decision, however, could not placate Elche’s furious coach Francisco, who was sent off for dissent.

Lewandowski grabbed his second goal of the game early in the second half, pouncing inside the area after Memphis had fought hard to win back the ball.