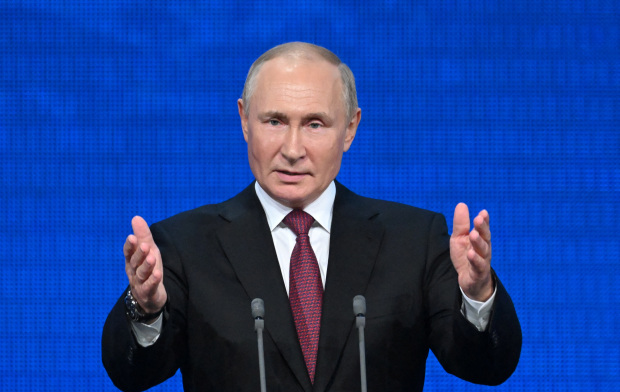 Russian President Vladimir Putin delivers a speech during an event marking the 100th foundation anniversary of the republics of Adygea, Kabardino-Balkaria and Karachay-Cherkessia in Moscow, Russia, September 20, 2022. Reuters Photo

LONDON: Russian President Vladimir Putin on Wednesday called up 300,000 reservists to fight in Ukraine and said Moscow would respond with the might of all its vast arsenal if the West pursued what he called its "nuclear blackmail" over the conflict there.

It was Russia's first such mobilisation since World War Two and signified a major escalation of the war, now in its seventh month.

It followed recent setbacks for Russian forces, who have been driven from areas they had captured in northeast Ukraine in a Ukrainian counter-offensive this month and are bogged down in the south.

In a televised address to the Russian nation, Putin said: "If the territorial integrity of our country is threatened, we will use all available means to protect our people - this is not a bluff".

Russia had "lots of weapons to reply," he said.

Russia's defence minister said the partial mobilisation would see 300,000 reservists called up and would apply to those with previous military experience.

Although Russia has been involved in a number of conflicts since World War Two, this was the first such call-up since then. The Soviet Union's long war in Afghanistan involved conscripts.

Defence Minister Sergei Shoigu said 5,397 Russian soldiers had been killed since the start of the conflict.

The United States said last month it believed between 70,000 and 80,000 Russian personnel had been killed or wounded, and in July estimated Russia's death toll at around 15,000.

Ukrainian presidential adviser Mykhailo Podolyak said the Russian mobilisation was a predictable step that would prove extremely unpopular, and it underscored that the war was not going according to Moscow's plan.

"Absolutely predictable appeal, which looks more like an attempt to justify their own failure," Podolyak told Reuters. "The war is clearly not going according to Russia's scenario."

Before Putin's address, world leaders meeting at the United Nations in New York denounced Russia's invasion of Ukraine and plans for four occupied regions to hold referendums in the coming days on joining Russia.

In an apparently coordinated move, pro-Russian regional leaders on Tuesday announced referendums for Sept. 23-27 in Luhansk, Donetsk, Kherson and Zaporizhzhia provinces, representing around 15% of Ukrainian territory.

Russia already considers Luhansk and Donetsk, which together make up the Donbas region that Moscow partially occupied in 2014, to be independent states. Ukraine and the West consider all parts of Ukraine held by Russian forces to be illegally occupied.

Russia now holds about 60% of Donetsk and had captured nearly all of Luhansk by July after slow advances during months of intense fighting.

Those gains are now under threat after Russian forces were driven from neighbouring Kharkiv province this month, losing control of their main supply lines for much of the Donetsk and Luhansk frontlines.

In his address, Putin said the partial mobilisation of its 2 million-strong military reservists was to defend Russia and its territories. The West did not want peace in Ukraine, he said.

A destroyed Russian tank is seen, as Russia's attack on Ukraine continues, in the town of Izium, recently liberated by Ukrainian Armed Forces, in Kharkiv region, Ukraine September 20, 2022. Reuters Photo

He said Washington, London, Brussels were pushing Kyiv to "transfer military operations to our territory" with the aim of the "complete plunder our country".

Ukraine's military has sporadically struck targets inside Russia throughout the conflict, using long-range weapons supplied by the West.

"Nuclear blackmail has also been used," Putin said, citing Ukraine's Zaporozhzhia nuclear power plant, the biggest in Europe. Both Russia and Ukraine have accused each other of endangering the plant in the fighting.

He accused officials of NATO countries of making statements about "the possibility and admissibility of using weapons of mass destruction against Russia - nuclear weapons".

"To those who allow themselves such statements regarding Russia, I want to remind you that our country also has various means of destruction, and in some components more modern than those of the NATO countries."

Putin restated his aim was to "liberate" the Donbas, Ukraine's industrial heartland, and said most people there did not want to return to what he called the "yoke" of Ukraine.

German Chancellor Olaf Scholz, speaking to the U.N. General Assembly in New York, said Putin will only give up his "imperial ambitions" if he recognised he cannot win the war.

"This is why we will not accept any peace dictated by Russia and this is why Ukraine must be able to fend off Russia's attack," Scholz said.

"It is needed to help Ukraine, and in our own interest, we must continue with it," he said.

British defence minister Ben Wallace said the mobilisation was an admission by Putin that "his invasion is failing".

US ambassador to Ukraine Bridget Brink said Russia had shown weakness by announcing the mobilisation of reserves and setting out the referenda in the Russian-occupied territories.

China's foreign ministry urged all parties to engage in dialogue and consultation and find a way to address the security concerns of all parties.

Putin's words also hit global markets, which have see-sawed since the Russian invasion of Ukraine on Feb. 24. The euro tumbled 0.7% against the dollar, European stock markets opened sharply lower, and investors piled into safe-haven bonds, pushing yields on German and US government debt down.

Michel Hewson, chief markets strategist, CMC Markets, said: "It’s the fact that he’s decided to dust off the nuclear card that obviously hasn’t gone down well...I think there is a perception that he’s really upped the ante, and how does the West respond to it?

Putin calls the Russian action in Ukraine a "special military operation" to root out dangerous nationalists and "denazify" the country. The West says it is a land grab and an attempt to reconquer a country that broke free of Moscow's rule with the break-up of the Soviet Union in 1991.

The war has killed thousands, destroyed cities and sent millions fleeing their homes.