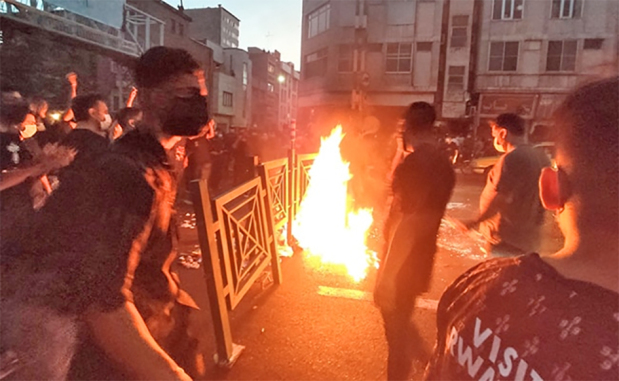 PROTESTERS in Tehran and other Iranian cities torched police stations and vehicles yesterday as unrest triggered by the death of a woman detained by the morality police intensified.

At least 31 people are believed to have been killed in the clashes.

Mahsa Amini, 22, died last week after being arrested in Tehran for wearing ‘unsuitable attire’. She fell into a coma while in detention.

The incident unleashed huge anger in the population and the worst protests in the Islamic Republic since 2019.

Most have been concentrated in Iran’s Kurdish-populated northwest but have spread to the capital and at least 80 cities and towns nationwide, with police using force to disperse protesters.

In the northeast, protesters shouted “We will die, we will die but we’ll get Iran back” near a police station which was set on fire, a video posted on a Twitter account showed.

Another police station was set ablaze in Tehran as the unrest spread from Kurdistan, the home province of Amini.

The protests have grown in the last five days into an open challenge to the government, with women removing and burning their state-mandated headscarves in the streets and Iranians calling for the downfall of the Islamic Republic itself.

Footage on social media from the northern city of Tabriz showed a young man allegedly shot by security forces bleeding out in the street as protesters shouted for help. In Amini’s home province in the northwest, Kurdistan, the provincial police chief said four protesters were killed by live fire. In Kermanshah, the prosecutor said two protesters were killed, insisting that the bullets were not fired by Iran’s security forces.

Meanwhile, the US yesterday imposed sanctions on Iran’s morality police, accusing them of abuse and violence against Iranian women and of violating the rights of peaceful Iranian protesters, the US Treasury said.

“Mojtaba, may you die and not become Supreme Leader,” a crowd was seen chanting in Tehran, referring to Khamenei’s son, who some believe could succeed his father at the top of Iran’s political establishment.

To prevent protests from spreading, Iran’s biggest telecom operator largely shut down mobile Internet access again yesterday, said Netblocks, a group that monitors Internet access, describing the restrictions as the most severe since 2019.