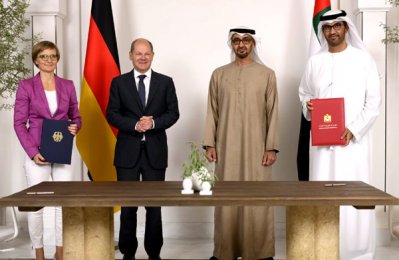 The UAE and Germany have announced the signing of a new energy security and industry accelerator (ESIA) agreement that will accelerate projects of joint interest between the two countries in energy security, decarbonization and climate action.
The agreement was signed by Dr Sultan Ahmed Al Jaber, UAE Minister of Industry and Advanced Technology, UAE Climate Special Envoy, and Managing Director and Group CEO of the Abu Dhabi National Oil Company (Adnoc), and Dr. Franziska Brantner, Parliamentary State Secretary at the Federal Ministry for Economic Affairs and Climate Action, in the presence of UAE President HH Sheikh Mohamed bin Zayed and German Chancellor Olaf Scholz as well as a number of ministers and senior officials.
As part of the agreement, Adnoc has entered into an LNG supply agreement with RWE AG (RWE), with Adnoc providing an LNG cargo for delivery in late 2022, to be used in the commissioning of Germany’s floating LNG import terminal at Brunsbüttel.
In addition, Adnoc has reserved a number of further LNG cargos exclusively for German customers in 2023, it added.
Adnoc said it had also entered into a number of agreements with German customers, including Steag GmbH (Steag) and Aurubis AG (Aurubis) for demonstration cargos of low-carbon ammonia, a carrier fuel for hydrogen that can play a critical role in decarbonizing hard-to-abate industry sectors.
The first of these cargoes arrived in Hamburg earlier this month. Under the proposed ESIA, both countries anticipate to explore further opportunities to accelerate growth and collaboration across the hydrogen value chain.
Masdar, the UAE’s renewable energy champion, will be actively exploring opportunities in the offshore wind markets in the North Sea and Baltic Sea in Germany that could generate up to 10GW of renewable energy production capacity by 2030 subject to the necessary German policy and regulatory requirements being met between the two nations.
Adnoc this month completed the UAE’s first ever direct diesel delivery to Germany and has also agreed to the terms with Wilhelm Hoyer GmbH & Co. KG (Hoyer) to supply up to 250,000 tons of diesel per month in 2023.
Lauding the agreements, Scholz said: "Through ESIA, we enable the swift implementation of strategic lighthouse projects on the focus areas of renewable energies, hydrogen, LNG and climate action."
The German Chancellor is on a two-day visit to the Gulf region.
Dr Sultan Al Jaber said: "This landmark new agreement reinforces the rapidly growing energy partnership between the UAE and Germany."
"As we embrace the energy transition, Adnoc is fully committed to accelerate and invest in projects of energy security, decarbonization and climate action as we continue to be a responsible and reliable provider and trusted exporter of low-carbon energy," he added.
Robert Habeck, Vice Chancellor and Federal Minister for Economic Affairs and Climate Action, said: "We highly welcome the acceleration of joint lighthouse projects in the field of climate action, decarbonisation and energy security."
"We look forward to closely collaborate on offshore wind, other renewables and hydrogen in the UAE and in Germany," he added.-TradeArabia News Service