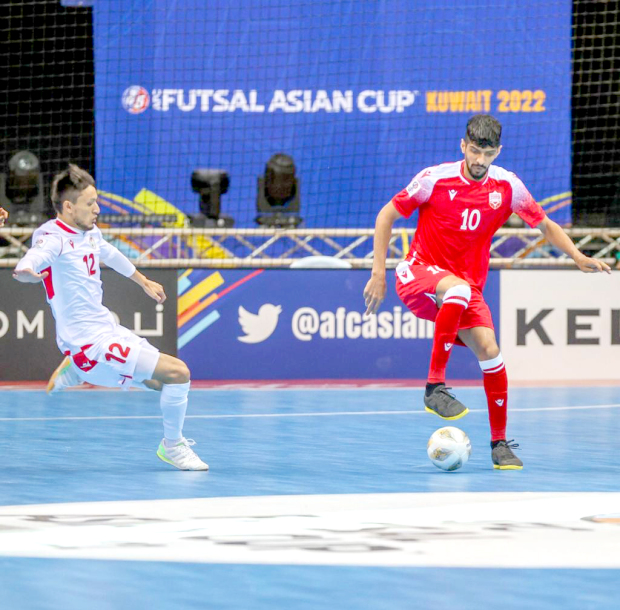 Bahrain’s Jassam Anan, right, during the game against Tajikistan

Bahrain will play Turkmenistan today in their second 2022 AFC Futsal Asian Cup game in Kuwait needing to win the crucial encounter in order to keep their chances of qualifying for the second round alive.

The kingdom’s team lost 4-3 to Tajikistan in their opening match on Tuesday and are currently placed third on the four-team table. Uzbekistan, who thrashed Turkmenistan, 8-0, are in first place with three points with Tajikistan, who also have three points, second because of goal difference.

Meanwhile, captain Mohammed Al Sanadi, who suffered a leg injury soon after arriving in Kuwait last Friday is still receiving treatment for a torn muscle and may only play for a few minutes if needed, team manager Raed Baba said.

“Al Sanadi is still only about 60% fit,” he told the GDN by phone from Kuwait. “Depending on the situation of the game, he may play for a few minutes if he feels up to it.”

Star player Jassam Anan said Bahrain would bounce back from the Tajikistan defeat, saying the team had learnt from the few, but costly, mistakes that had resulted in the loss.

“It was a tough game and we began a little more slowly than was ideal,” he told the GDN. “We picked up momentum as the game wore on but missed some chances and the few mistakes we made cost us the match. But the game today is a new one and we will fight to win. We will play as if it is a final and do the same in our last group game against Uzbekistan, also.”

The match will start at 11am, Bahrain time.

Bahrain’s next game is against Uzbekistan on Saturday. The 16-team tournament runs till October 8.