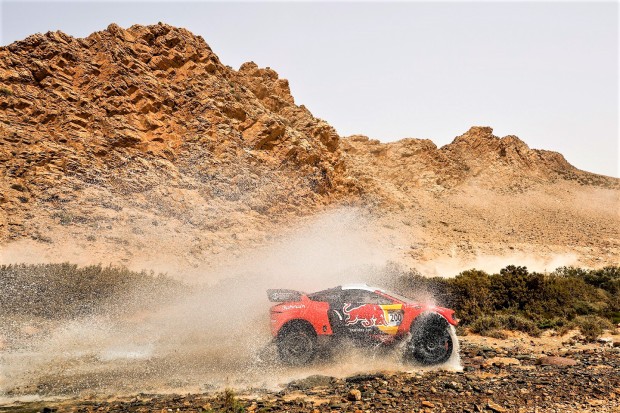 Loeb in his BRX Prodrive Hunter

Sebastien Loeb powered his way to a brilliant stage victory for Bahrain Raid Xtreme to take the lead in the Rallye Du Maroc yesterday, as the Prodrive Hunters dominated proceedings in the Western Sahara desert.

The nine-time World Rally champion won the 315-kms competitive section from Agadir to Tan-Tan by 10 minutes 15 seconds from BRX team-mate, Orly Terranova, with Guerlain Chicherit in another Hunter completing the top three on a dramatic day in Morocco.

The result lifted Loeb from seventh overnight into an outright lead by eight seconds from Terranova, with Chicherit just 4 minutes 12 seconds away in third place overall.

“We had a very good stage,” Loeb said. “It feels good for sure after yesterday. That was a really bad day for us.

“We didn’t make too many mistakes today. We just had one puncture. I think a lot of other cars had a lot of punctures. So we had a clean run.

“It was a very difficult stage for navigation, and we had to look for the waypoints a few times. I think some of the others struggled a bit more with the navigation, so we did a very good job today.”

Most significantly, the French star finished the day with a massive 33-minute 18-second advantage over Qatar’s Nasser Al Attiyah, his fierce rival in the battle to become the first World Rally-Raid (W2RC) champion.

While the trio of Prodrive Hunters had all lost ground through a combination of mechanical, tyre and navigational problems on the previous leg, today it was Al Attiyah, and Saudi Arabia’s overnight leader Yazeed Al Rajhi, who found trouble.

Lying second at the end of the first desert stage, Al Attiyah plunged out of contention after a series of three punctures forced him to wait for assistance, while punctures late on the stage dropped Al Rajhi to fourth overall.

For the second day running, Chicherit impressed on his first competitive drive in the Hunter, setting the pace on the early part of the stage.

It was then Loeb’s turn to increase the power and take the stage lead before the halfway point, with BRX team-mate Terranova also making good progress to make it a 1-2-3 for the Prodrive Hunters, before the Argentine later moved ahead of Chicherit.

Yesterday’s leg had begun with a 119-km journey from Tan-Tan to the start of the rally’s second desert stage, which included a variety of terrain up to a large plateaux at the midway point, followed by a succession of dunes.

The stage finished at the new Laayoune bivouac, located on an imposing site overlooking a wadi, where the Rallye du Maroc set up camp for two nights. In between comes today’s 299km third desert stage, with another two stages to follow before the finish in Agadir on Thursday.