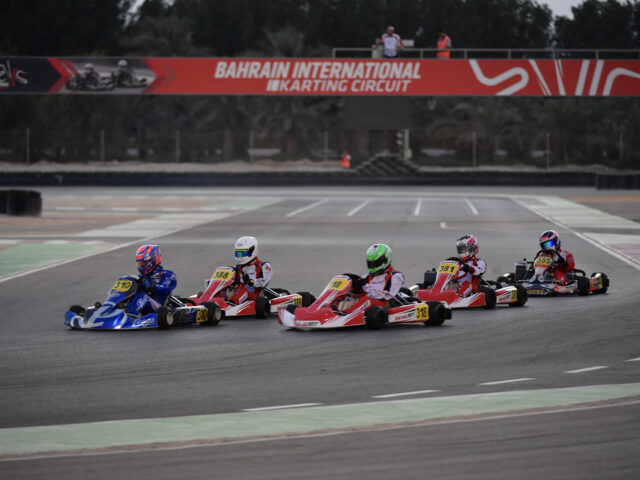 The back-to-back meetings brought together the kingdom’s leading racers of different ages and nationalities, all of whom were competing in their very own Rotax-powered karts.

Three youngsters came away with fantastic doubles – Lewis Smith in the Senior MAX class, Luca Kane Houghton in the Junior MAX category and Levin Barbier in the Micro MAX. Joining them on the podium with a win apiece in the Mini MAX class were round one winner Shaikh Ahmed bin Saqer Al Khalifa and round two victor Isa Almoayed.

In round one, Fahad Almuqla got the better of Smith by 0.019 seconds in Senior MAX Qualifying and then won the Pre-Final by just 0.101s ahead of Shaikha Haya bint Duaij bin Salman Al Khalifa, with Smith in third.

But in the 15-lap Final, Smith took over as the leader on the third lap and held on all the way to the chequered flag, winning in a total time of 13 minutes 48.724 seconds. Joining Smith on the podium was Oliver Kruglov, who 0.841s behind as the runner-up, and Almuqla, who had to settle for third 0.998s back.

In the Junior MAX category, Houghton was the leader at the start, taking pole for the Pre-Final. But there, he could only manage third place as Mohammed Alhasan clinched the win and Gracie Rose Grantham was the runner-up.

However, Houghton recovered masterfully in the Final, although not without a tight battle all the way until the end with Alhasan and Gracie Rose. Houghton powered to the front on the 15th and last lap and won in 13:51.631. Gracie Rose followed close behind 0.110s adrift, while Alhasan was third 6.025s back with a five-second penalty.

In the Micro MAX class, Ali Almoayed finished ahead of Levin both in Qualifying and in the Pre-Final, with Mohammed Waleed in third. In the nine-lap Final, Ali went on to take the chequered flag but Levin inherited the victory as Ali and Mohammed were each handed five-second penalties.

The third and fourth rounds of the SRMC will also be held on successive days on October 14 and 15.