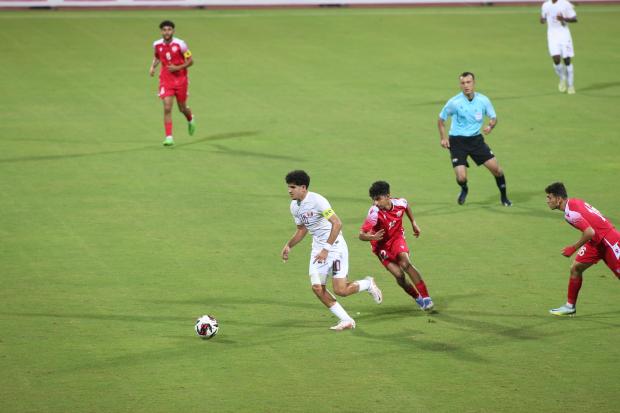 Action from the Bahrain-Qatar match

A second-half equaliser by midfielder Sami Bassam Awdi enabled Bahrain to battle to a 1-1 draw with Qatar last night in their second Group C game of the AFC U17 Asian Cup Qualifiers in Muscat, Oman.

Earlier, Qatar had shot into the lead when defender Ali Mohammad Shahabi scored in just the 10th minute of the game to put them 1-0 ahead.

Bahrain counter-attacked throughout the rest of the first half but came up short each time as the Qatar defence proved difficult to breach.

It wasn’t until Awdi produced his spectacular play just 10 minutes into the second half that the kingdom’s team were able to draw level.

However, there was no further joy for Bahrain as Qatar tightened their defence again and refused to allow their opponents any more scoring opportunities.

Both sides are now level on top of the five-team group points table with four points each.

Bahrain defeated Lebanon, 1-0, in their opening game last Saturday to get their campaign off to a winning start while Qatar beat Iraq, 2-1, on the same day.

Having started their tournament on a winning note after defeating Lebanon, 2-1, yesterday, Oman are likely to be tough opponents, especially with the added advantage of playing before home fans.

Bahrain will take on Iraq in their last group game on Friday.