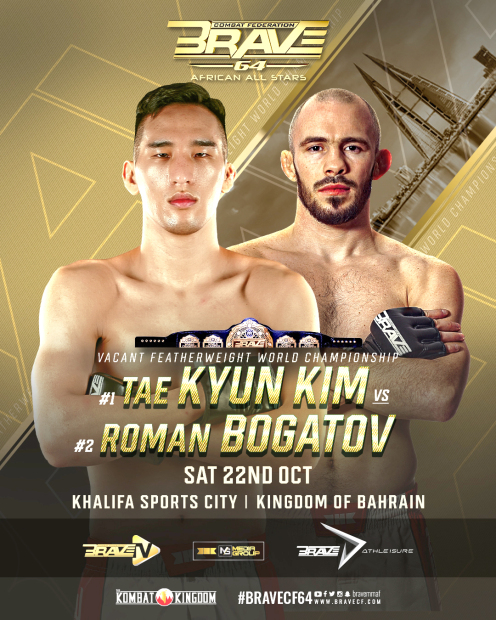 Both men are undefeated under the BRAVE CF banner thus far, with Tae Kyun Kim building his career up at the promotion, having been signed back in November of 2019. Since then, ‘Ares’ has amassed four victories in as many outings.

The last two wins, however, have firmly placed him at the top of the heat for BRAVE CF as the current number one ranked featherweight beat Husein Kadimagomaev and Nurzhan Akishev, with both fights featuring as finalists for the BRAVE CF 2021 Fight of The Year award.

Kim will face a tremendous challenge in the form of number two ranked Roman Bogatov. The Russian standout has a 2-0 record under BRAVE CF, with victories over Nurzhan Akishev and Abdulmutalip Gairbekov - with the last one also included as one of the finalists for Fight of The Year. They were initially set to face off at BRAVE CF 58, when the promotion made its debut in Kim’s native South Korea, but an injury to ‘Ares’ prevented the fight, which now takes place with the gold belt on the line.

Before the featherweight world title bout, BRAVE CF 64 will feature a huge bantamweight fight, as number five-ranked Nkosi Ndebele will look to continue his rise up the rankings against Matiss Zaharovs.

Number one middleweight Abusupyan Alikhanov will be coming in ready to establish himself as worthy of a shot at the vacant title when he takes on Mzwandile Hlongwa. Also featured as part of BRAVE CF 64 is a catchweight bout between Omar El-Dafrawy and Kevin Ruart, and a super welterweight duel between Brendan Lesar and Zagid Gaidarov will also take place.